Technically, this was everybody's birthday bonanza. It's so hard to celebrate for/with all of your friends when everyone is so busy. So for those who we missed or who got half-assed birthday wishes, we had a make-up day. It just happened to coincide with the start of my birthday week. S'all good!

After going back and forth on whether we should mini golf or roller skate or just go to brunch, Kate suggested that we head over to the LACMA to see the Tim Burton exhibit. Perfect!

The exhibit has timed entry, and we had tickets for later in the afternoon, so we helped ourselves to some of the other galleries in the meantime. In the Broad Gallery were some works by Jeff Koons, including his giant metal balloon dog. Charlie is standing in front of this picture, to give it some scale. Charlie is a big dude - over 6 feet if he's an inch - so you can see how massive this piece is. It's pretty to look at and danged impressive when you hear about HOW it was made and the cost, including bankrupting the company that fabricated it. 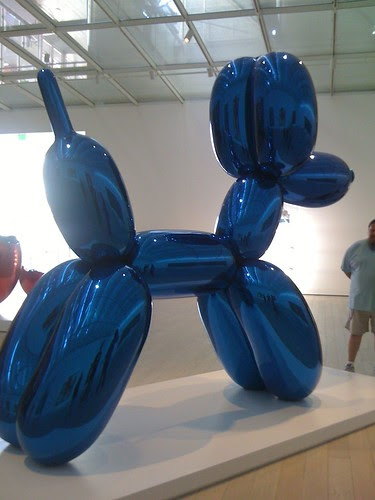 There were several other Koons pieces, including these gigantic collage-style pieces on the wall. At first glance, I thought "eh, collage" and moved on. Ryan, however, stood and stared for a good long while. It was then that I realized OH! These weren't collaged or printed, these were PAINTED to look like collage. Ok, so they were pretty impressive too. 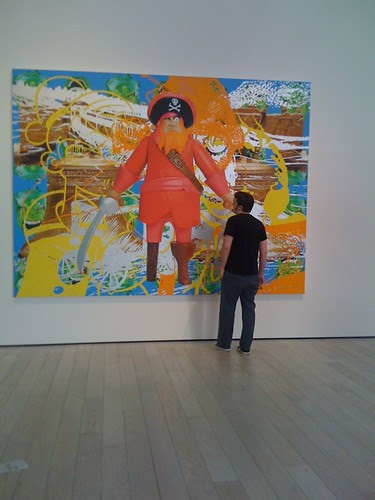 Several other sculptures were in the gallery, including Michael and Bubbles -- a tribute to Michael Jackson and his pet chimp, done in a gold porcelain style. 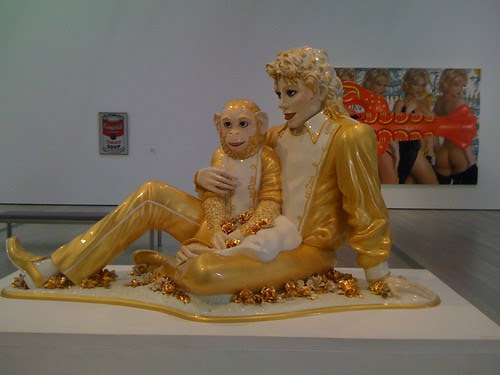 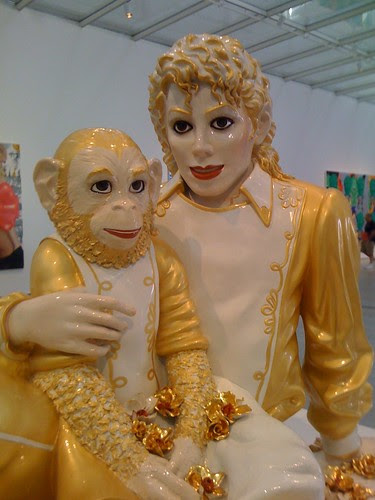 And immediately behind these were some of Warhol's famous works, like his soup cans (both big and small). 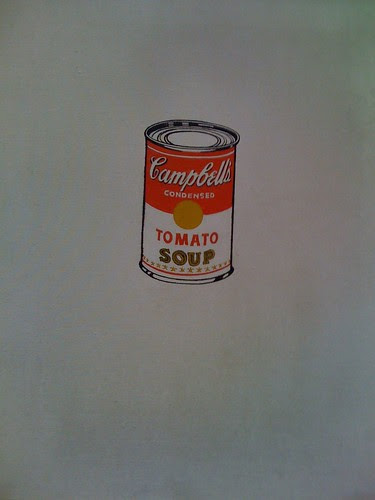 In another corner were Warhol's screenprinted boxes for Corn Flakes. Interesting, but... I dunno. I wouldn't pay millions for them (each one is individually owned and listed as a gallery object). 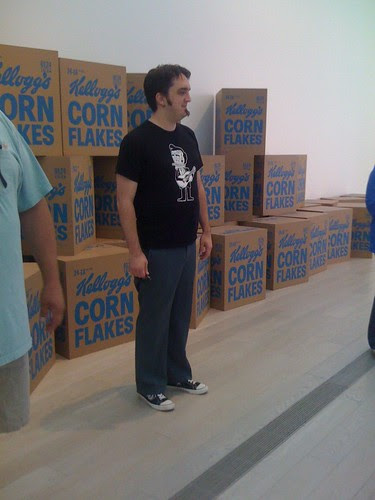 When we got into the Burton exhibit, we were told that there was a zero tolerance policy for photographs or use of cell phones. So I have nothing to show you from there. The exhibit was PACKED. Plenty of cool stuff to see, like pages and pages and pages (thousands!) of Burton's sketchbook pages. These were just ok. I mean, I like his style as much as the next gal, but once you've seen the first 200 it's reasonable to say you've seen 'em all.

The stuff that I liked the best were the pieces and props from Burton's movies. Most of these weren't made by Burton himself, of course, but were nonetheless extremely impressive. One of the items displayed was Johnny Depp's suit from Edward Scissorhands. Whoa - super tiny! Did you know that Depp is super tiny? I didn't! Miss Bliss and her husband knew that from working in the biz that he's an "apple boxer" - meaning that he stands on a lot of apple boxes to get the right height in movies - but it was a surprise to me. Depp's IMBD page says that he's 5'10" and online people speculate that he's closer to 5'7" but I'd say that based on the Scissorhands suit, he's probably a little shorter - maybe 5'4"? Maybe even smaller. In any case, he's TINY and thin, thin, thin!

The costumers that Burton works with are hands-down the best and looking at the various pieces were my favorite part of the exhibit.

The exit leads you right back outside, where we caught glimpses of rainbows in the sky (no rain, it was still pretty hot outside, maybe 85 or so at 6pm). I also walked back around to the front to snap a couple of pics of the lamps outside the LACMA. I love these, they're salvaged from the "old" LA and still fully functional. They're beautiful at night. 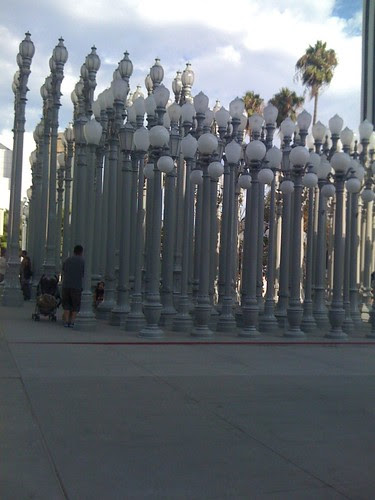 Rainbow and signs of the zodiac around the plaza. 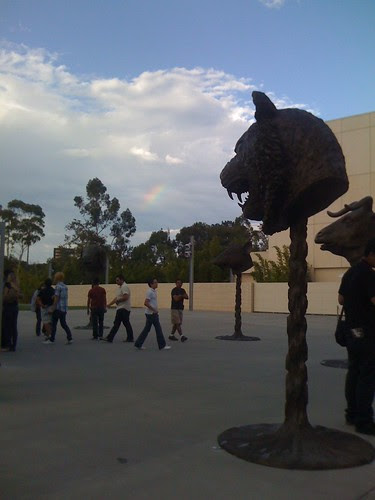 I also spied actor James Hong waiting to enter the Burton exhibit. I wanted to say something... but what do you say to a guy like that? "Oh, I loved you as the evil Chinese guy? You were great as the smarmy Chinese guy?" Yeah... so.... I just snapped a stealth pic and moved on. 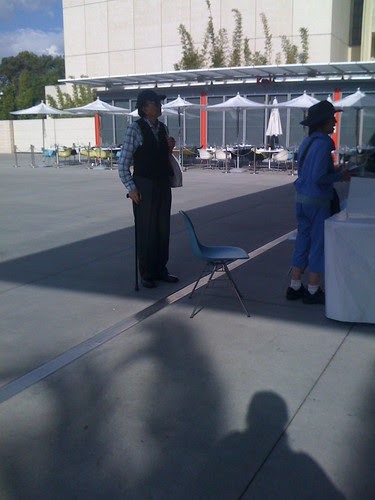 After running through the last of the exhibits and gawking at mummies, the group headed over to our favorite all-night eatery, the French Market Place, and ate everything in sight. The waiter recognized us (*gulp*) and when he saw that I had a gift bag, he asked who's birthday it was so I pointed to Kate. He secretly arranged for an eavesdrop around the dessert menu review and when Kate said the carrot cake sounded good, he sent out the whole team to sing to her and bring her carrot cake. It was great!

Another wonderful adventure with you guys. You left out the part where you were VERY patient when Ryan and I would shut the F up in the parking lot and let everyone go home. I swear Mia you are a very good sport to put up with us.xoxo