So... yeah. Ryan's part of that whole "New 52" initiative over at DC Comics. Whatevs. It's just a major reboot of their top 52 titles and he's just working on one of the top titles, Detective Comics, from which the company gets its name. NO BIG DEAL.

After months and months and months of hard work - literal blood, sweat, and tears - the book was released on September 7, 2011. As part of the launch, our old pal Mike invited Ryan to sign his book at his shop, The Comic Bug, so we headed there in the evening to doodle some sketches and sign autographs (him) and crochet granny squares (me).

The first part of the night, I was sitting at the table beside him, quietly crocheting and keeping myself busy. Until I realized that everyone in line (20+ people) was staring at me. I guess since I was visible and moving, because something to look at. It made me feel weird, so I retreated to the couch by the window. 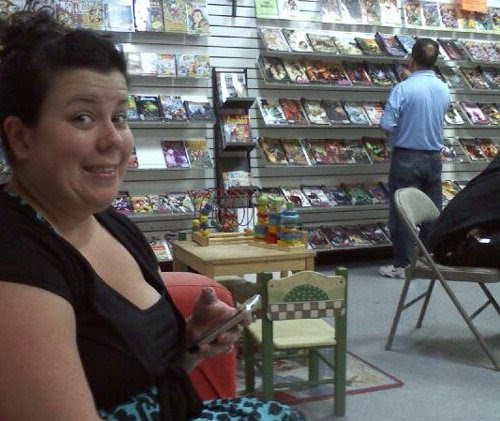 Shortly after that, who should arrive but Kate? We told her, specifically, NOT to. Signings are boring (that's why I brought my crochet project!) and the shop was far away and she has a crazy schedule, blah blah blah. But she's such a trooper that she came all the way out to Manhattan Beach after an audition for Glee where she had to read opposite Jane Lynch. NO BIG DEAL.

I had brought along cupcakes for the comic book masses. There was a lot of back-and-forth on whether I was going to the signing or not... and if I was, then I was going to make custom cupcake picks to match the book. Since I didn't know for sure until just before we left, I ended up using some Batman rings for cupcake toppers. Kate snapped a pic of ours because they are super awesome. Also: I did not BAKE anything. The cupcakes were from Ralph's which means they were super tasty. 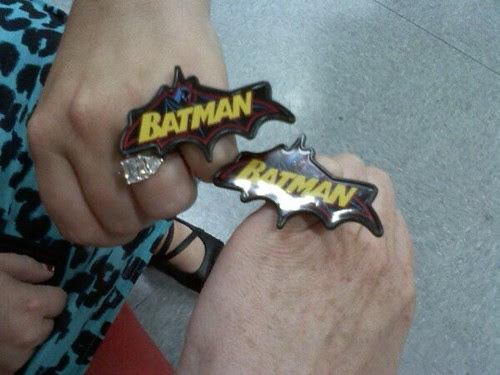 Ryan signed books and did sketches for 4+ hours and there was a steady stream of people all night. We guessed that at least 100 people came and got sketches and autographs. The shop had ordered several hundred copies of the book and when we left that night, there were 12 left. Not too shabby! 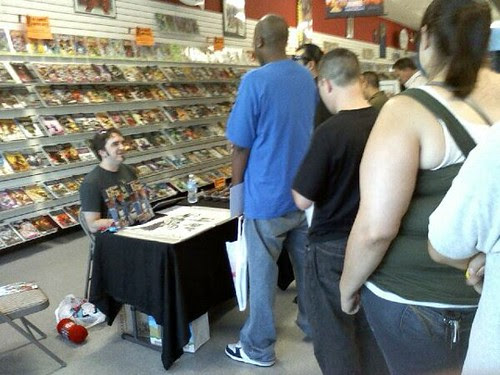 As tired as we both were, we closed the place out. Literally. We ate the crusts of the pizza and stood around talking (directly in the path of the guy trying to sweep up so he could go home) for hours. It was awesome. And a great way to kick off the book! 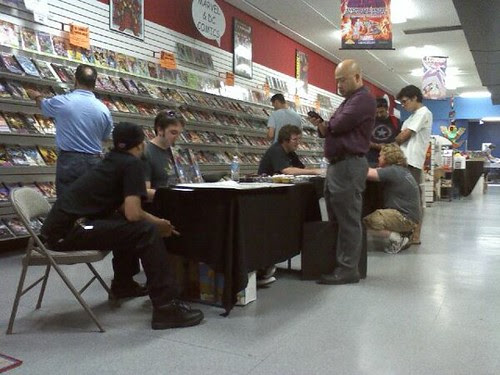 As of this writing, the book is going into a second printing, which means that it sold more than 200,000 copies in the US -- and most were sold within the first 24 hours of release. I heard that it was selling on eBay that same night for $20+ (cover price is $2.99) and even now there are several copies listed for $15 or more. Pretty cool.

Another cool thing: this book sold as well as some of the other titles and didn't have variant covers! To the uninitiated, it works like this: some books come out with special variant covers - say 3 at a time, each drawn by a different artist or whatever - but the variations are printed in small quantities and randomly packed. In theory, every 50 copies of a book that is ordered should contain at least one variant cover. So if there are 3 variants out there, retailers will order 150 copies in the hopes of getting one of each variant (not guaranteed). Thus, a lot of books with variants -- such as many of the New 52 -- may have sold more copies than usual because retailers were trying to get the coveted (and valuable; variants technically retail for the same price but shop owners often increase price based on demand) variant covers. Detective Comics only had ONE cover and sold as many copies. That's pretty danged cool!