Disneyland with the Giggly Family

It's been a couple of years since we've gotten to go to Disneyland with the Giggly Family. In fact, little Max had never been! They came to explore the parks for a couple of days and stayed at the hotel - what a great first time, right? 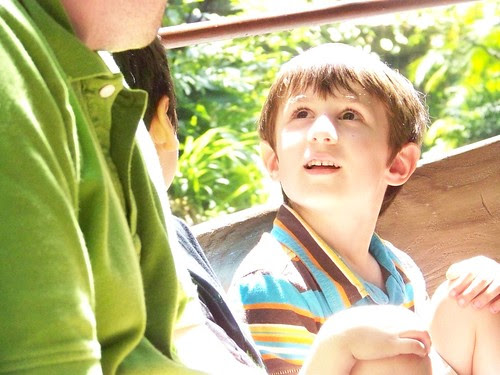 We took the Kidlet with us, because he looooves Disneyland and he was excited to see the Family too. He was determined to be BFFs with Max by the end of the day. They sat next to each other on the Jungle Cruise. It was really sweet. Kidlet kept pointing out his favorite parts "look! It's a tiger! I think it's real!" 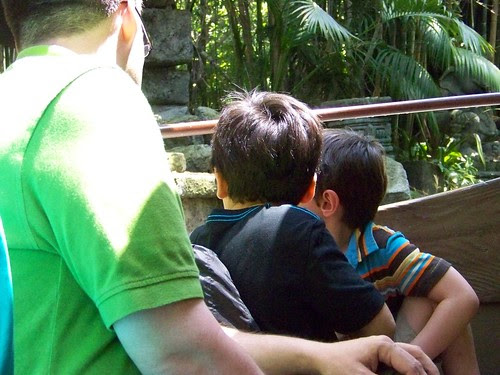 I'll be honest, I was hoping that Max and the Kidlet would be surprised by the 'piranha attack' part of the ride. The fish suddenly come out of the water and it splashes everywhere, so I started filming. I was hoping to capture screams of terror... instead, I got "oooh, look! Fish!"

It was a really hot day and the park was really crowded, so the Gigglys took a break and went to their room to rest for a bit. They had been at a family reunion all weekend so it was probably nice to have a little space to themselves for a bit. While they were gone, we "big kids" took advantage of a short line for Thunder Mountain Railroad and jumped onboard. The Kidlet was so excited to be seated in the "way back" of the train, so I decided to film it on my new Flip camera. Of course, since I was filming, he whacked his head. LOOK AT WHAT GREAT GUARDIANS WE ARE!

The lines were pretty long all day long so there was a lot of "sorry, Kidlet, that line is 2 hours long. We can't go on it today." We did get to ride Indiana Jones, which is a top pick for the Kidlet, and while the others rode the Haunted Mansion (he has nightmares about Medusa for some reason and the picture of the snake-haired lady sometimes bothers him. He's always just looked at his shoes until we get past it, but I think he was overly tired and couldn't cope) he and I went hat shopping. He picked some mouse ears, which was super fun and cute. After that, I think he was feeling bold. He wanted to go on Space Mountain, even though the wait was over an hour. He HAD to try it for the first time. Needless to say, he enjoyed it immensely!

I was sorry that we couldn't come back the next day to play with the Gigglys again because my brother was graduating from high school. Lousy brothers!

The kidlet will be an expert Disney tour guide in no time!

I always love meeting up with you guys at Disneyland. :D