Time flies when you're having fun and dang if I haven't been having a ball! Before I forget, I wanted to post a little something about Phoenix Comicon and all the fun that was had.

So! This year I upgraded my artist alley table to a 10x10 booth (!!) and was able to get a spot right next to Erin, Stacey, and Brianna so we became the ultimate party booth of handmade awesomesauce. I decided to get my paintings up off the table for the first time and bought some gridwall to display them. I think it really worked out well and having them at eye-level helped people find me better. The peg people were still on the table in their dollhouse, which worked out okay. We've already booked the same booth configuration for next year and I'm noodling some ideas to get the peg people up off the table, too. Stay tuned! 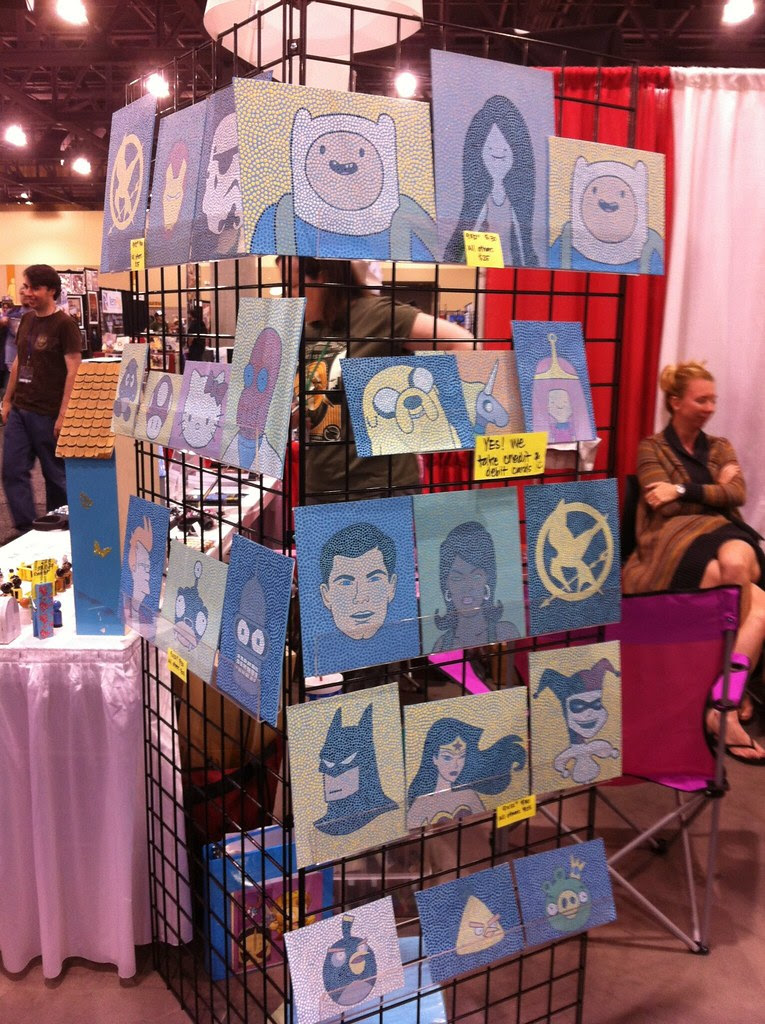 Kate also shared space with me, which was really great. She just released her third book, Maggie Get Your Gun, which is the 2nd in the Maggie McKay, Magical Tracker series (super fun - go get your copy NOW!). 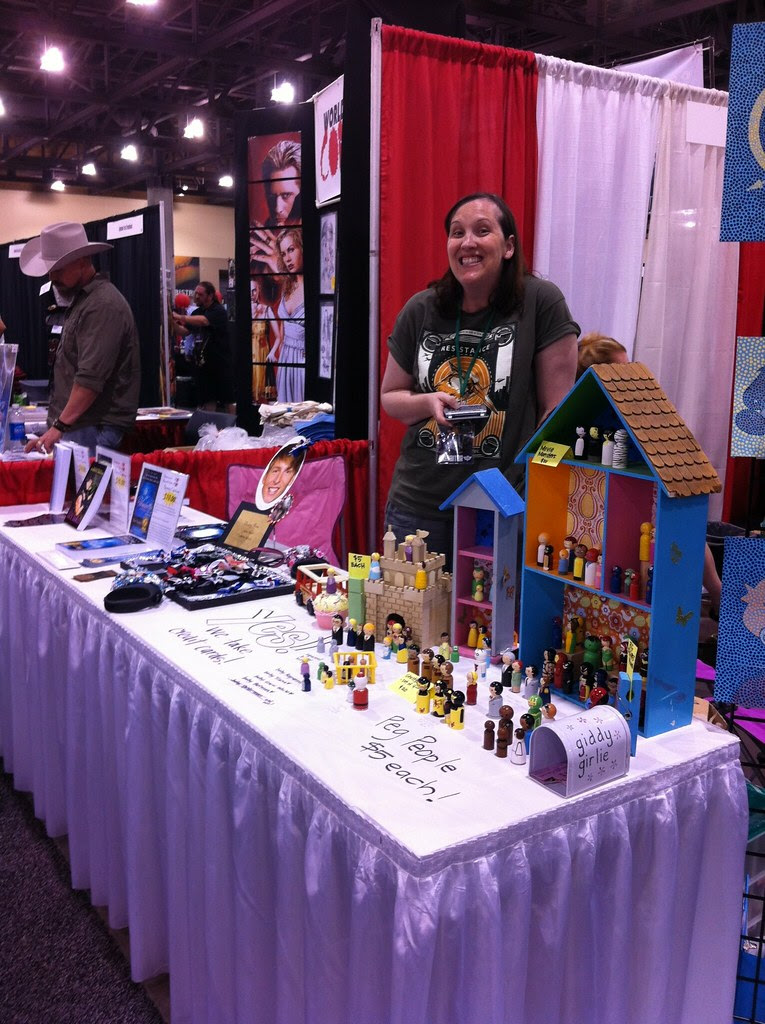 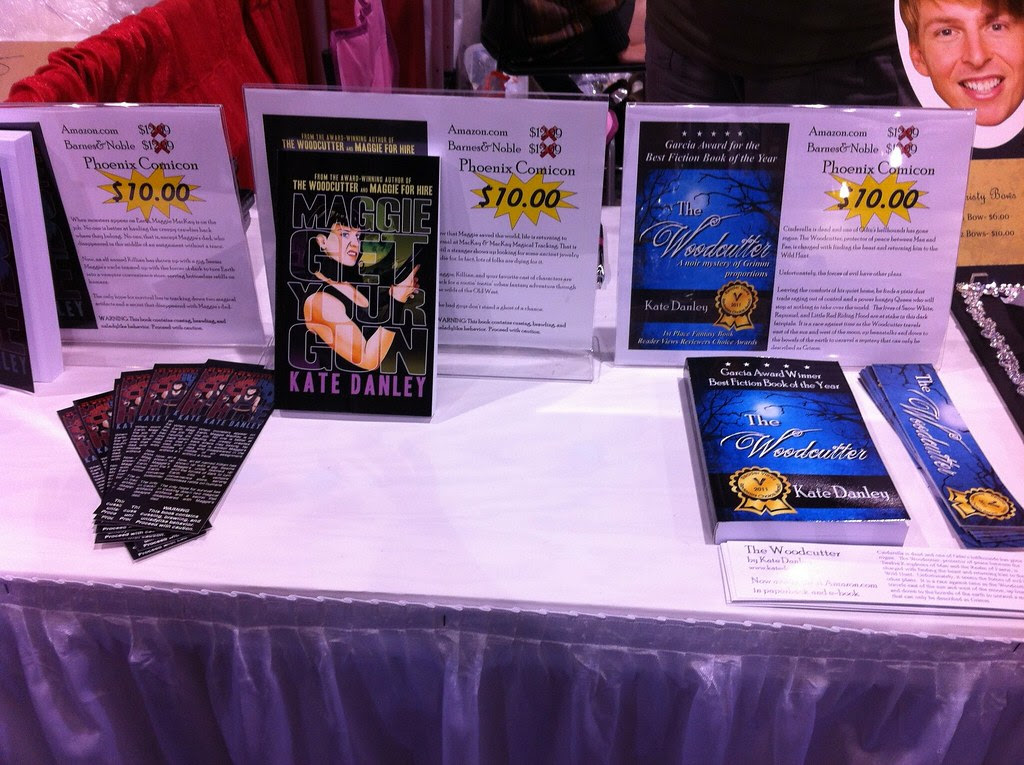 And as if the convention wasn't enough excitement, Adam, Kate, and I had an additional adventure! To start with, we went to Ryan's panel discussion about various DC Comics which was really fun and funny and Ryan, of course, had a moment where a moth came out of nowhere and landed on his head. Always a bug attraction, that guy! HP took some excellent photos, including this one: 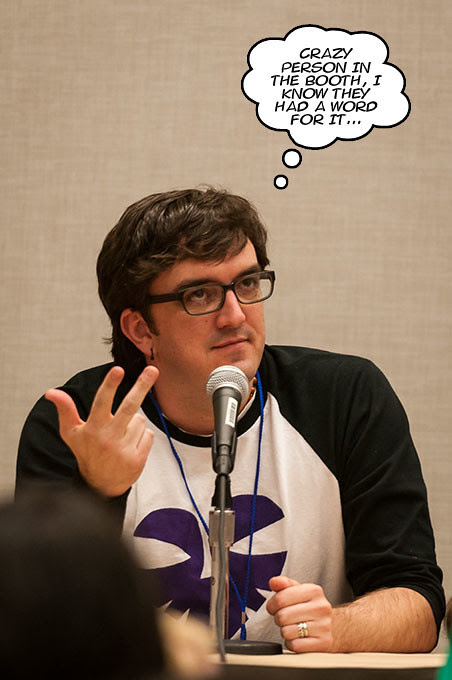 So, after the panel was over, Adam, Kate, and I were rushing back to the booth because it was time to close up shop for the night. We decided to take the elevator because it was the quickest route. Well, it should have been. Instead, we got in and a guy and his daughter squeezed in at the last minute and just as the elevator started to descend, the guy realized that he'd wanted to go up so he pushed the button for a higher floor and - SHUDDER STOP. The elevator just stopped. After a minute, we realized it wasn't going to fix itself, so we used the emergency call button and alerted the maintenance crew that we were stuck. They were very kind and patient and were ultra concerned that we would panic. They stayed on the line with us through the intercom and also called my cell phone to "maintain contact" and gave us minute-by-minute updates (which were mostly "we're working on it, sit tight."). After about 30 minutes, we decided to take a seat on the floor and wait it out. 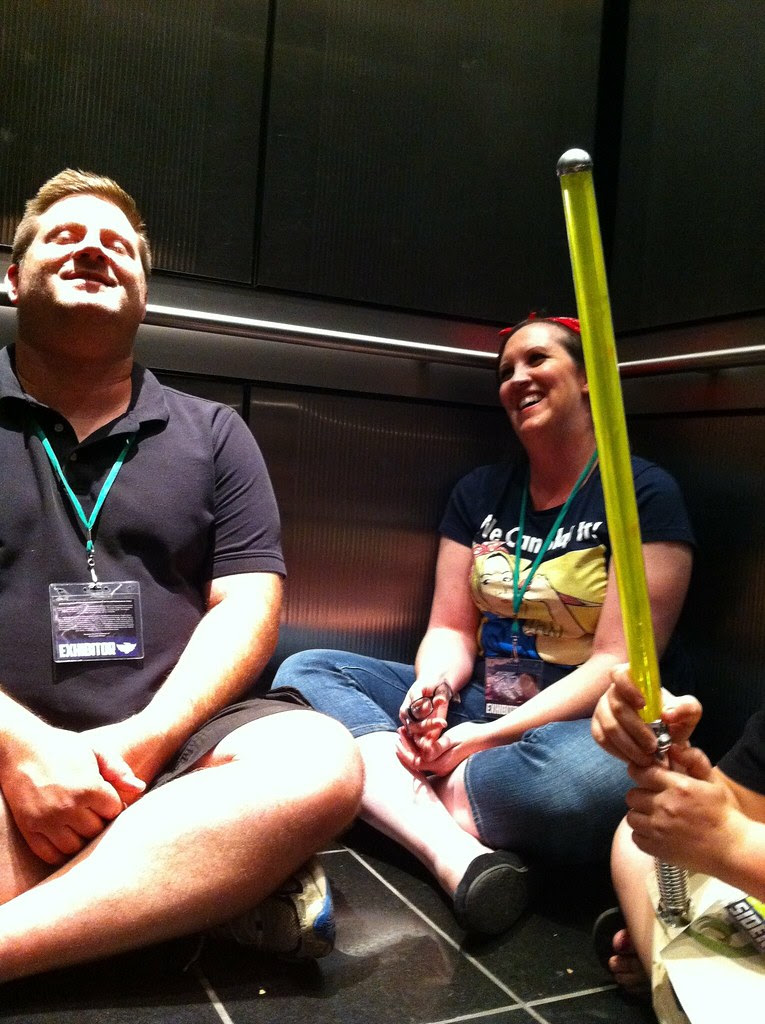 The little girl on the elevator with us was determined to 'save the day' with her new lightsaber and was constantly whacking at the door with it (seen above). But there wasn't much that could be done from inside. 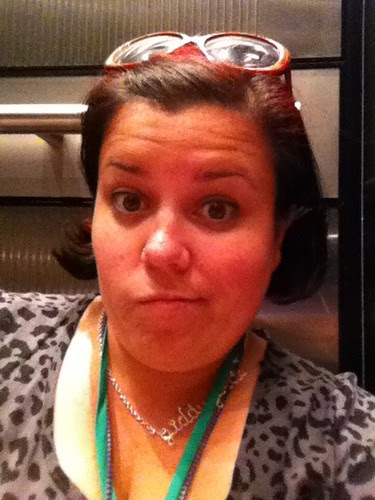 It was boring and stuffy (when they emergency stop the elevator, it also disables the air conditioning) but otherwise uneventful. We had to wait for about an hour for the fire department to come. I was expecting that they'd just jimmy open the door with a crow bar (I had pulled it open about 1/4 inch with my fingers and could see that we were only slightly higher than the floor - about 2 inches). Instead, they decided to "rescue" us through the ceiling.

I made a short video of the fireman opening the roof hatch and moving the heavy panel over.

Here's our rescue squad! Dropping through the ceiling! 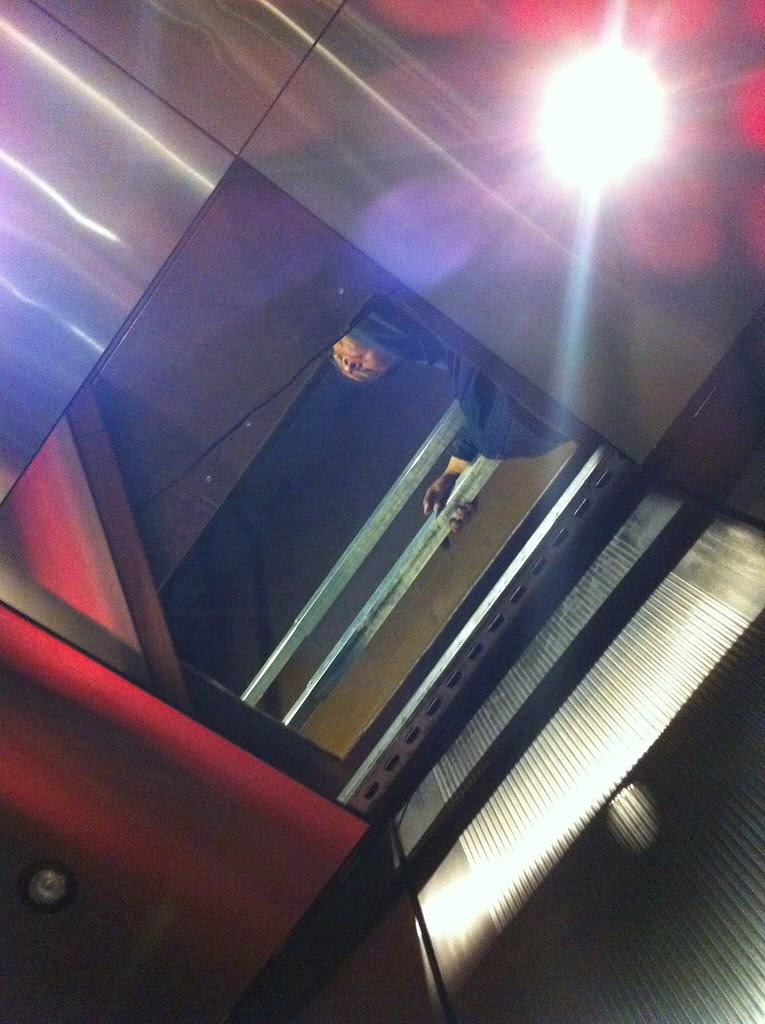 The firemen dropped in a ladder and then instructed us to climb out, one at a time, up through the roof. So we did. Adam was the gentleman and the last one out, so I was able to snap a few pictures of him being rescued. 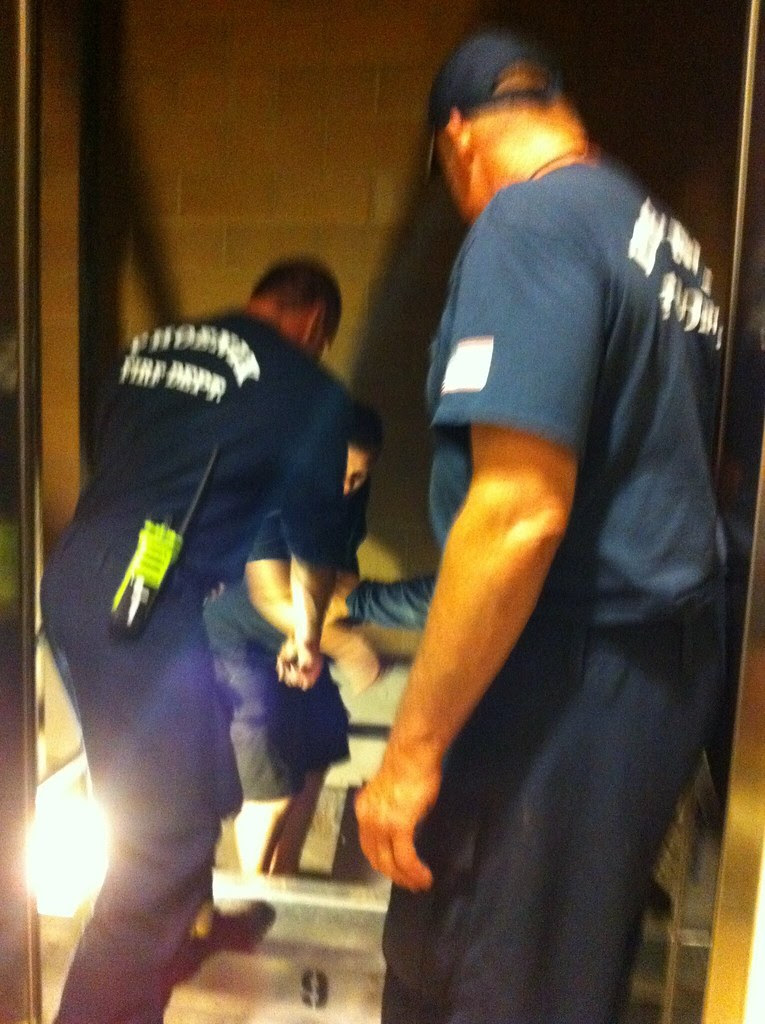 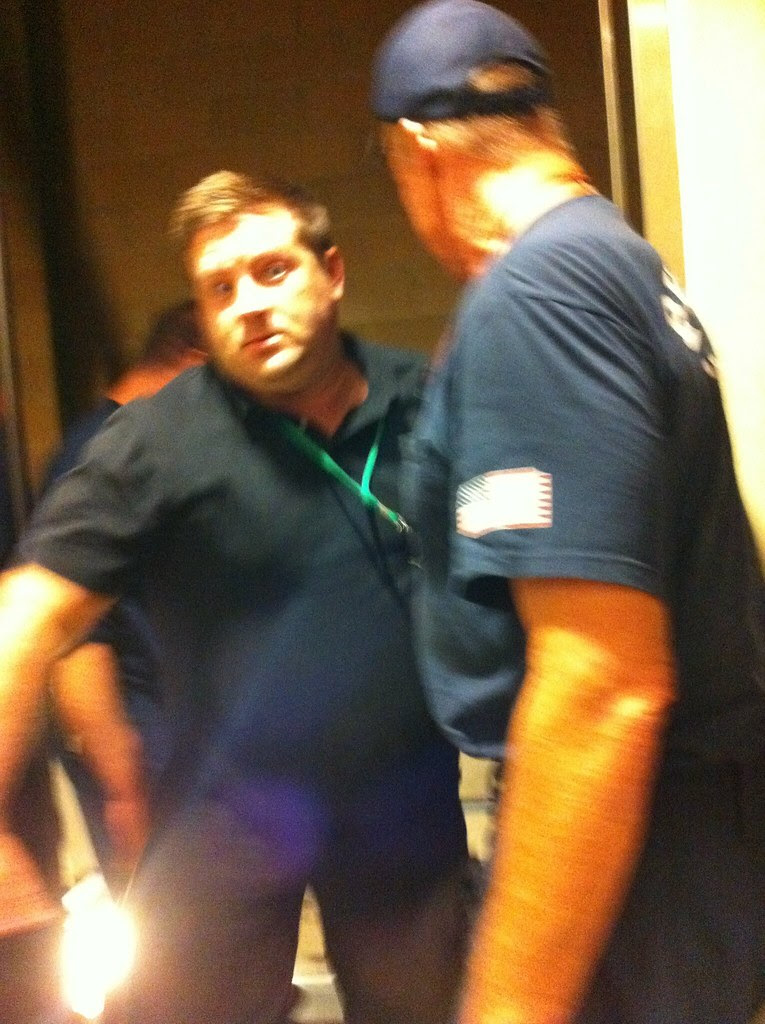 The best part was that when we finally got out, there was a HUGE crowd of people standing around the elevator, cameras ready! Flashes were going off, videos were being made. We felt like babies being saved from a well! It was hilarious. And then Security whisked us aside to sign some paperwork and confirm that we were safe, etc. They were pretty strict about the crowd not touching us or talking to us... it was like a celebrity getaway! Only with more legal forms and security dudes who were not fluent in English trying to fill out paperwork for us (they wouldn't let us write it ourselves, we had to dictate our names, addresses, etc. but the guys were really slow on the translation, so spelling your name A-D-A-M took about 10 tries. It took a long time.).

We missed the end of the show, but thankfully our cadre of friends closed up the booth for us and made sure our stuff was safe.

The next day, we were minor celebrities and got to enjoy telling everyone not to overcrowd the elevators because "we were trapped in an elevator last night and don't want to go through that again!" Luckily, we were all cool, calm, and collected so it wasn't really a bother - more of an adventure and a bit of a time waster, but it was okay.

My prizes from the show were a pair of Ocarinas. Okay, I know! Shut up! But this booth was near ours and I could hear the ladies playing the Legend of Zelda songs and it was so charming! I had to have them!! The first one is a ceramic Ocarina that plays 12 notes, so it can play the full Zelda songbook (included!) and the second one... 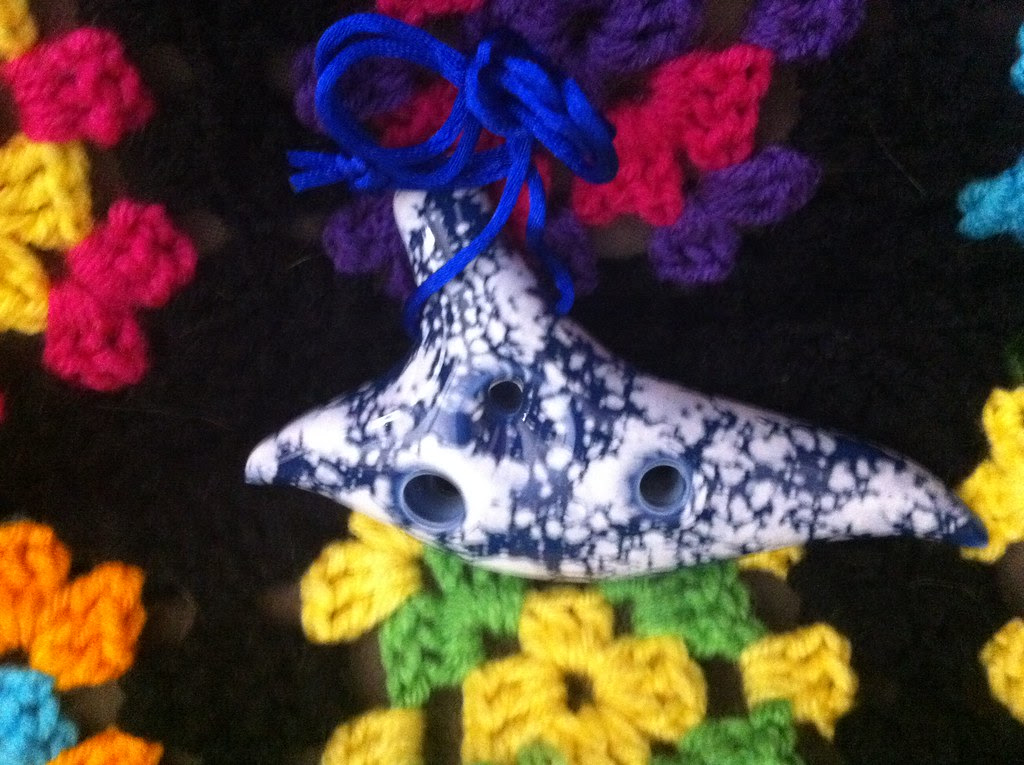 The second one is a TEA-carina. Oh yeah, that's right! It's a tea cup AND an ocarina! So you can sip your tea and when you're done play a little tune. OBVIOUSLY this is the next step in my career: master ocarina player. And I might have been listening obsessively to the songs that St Louis Ocarina has recorded. 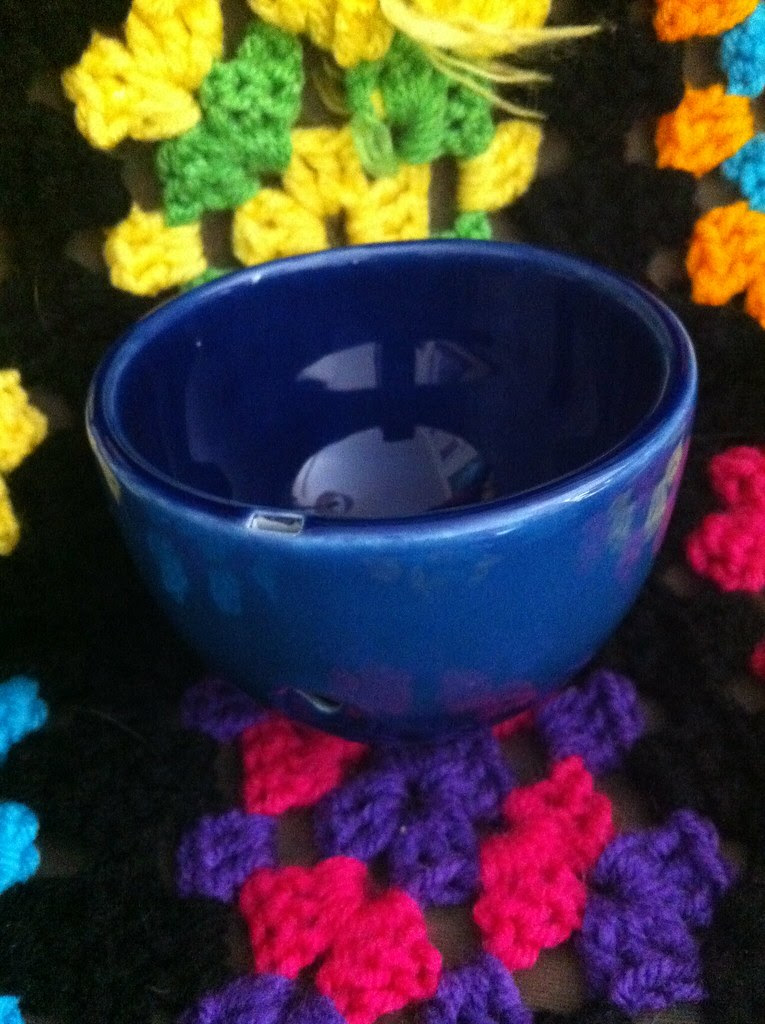 The whole weekend was so great that even Tracy had to come by. We were so punchy and tired by the end, that we started doing cheerleading moves or something while pictures were being taken. Maybe that was just me. I dunno. It was so much fun, I can't wait to do it again next year!! 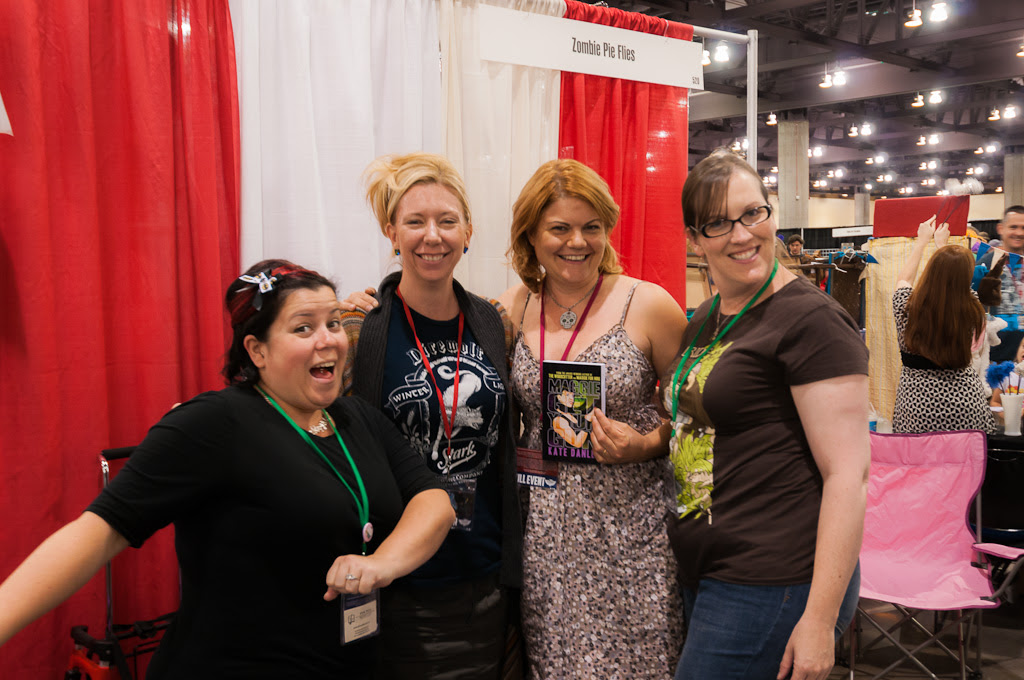