Last night, I was invited to attend a gallery event at the Fowler Museum at UCLA which was being put together by Jenny Hart of Sublime Stitching. (Since the event was open only to current students, we didn't discuss the event publicly - so don't feel left out!) As an extension of the Alighiero Boetti exhibit, we "stable" embroiders came to work on a collaborative piece. More about that in a minute.

First, let's talk about ME. Okay, so I am generally pretty clueless (duh) but last night was a pinnacle moment. I wore a blue sweater which matched my blue nails and my blue sewing kit... 'twas a bit much, I concede. I also had blue sunglasses (last night's look re-created today in the middle image below)... oops! 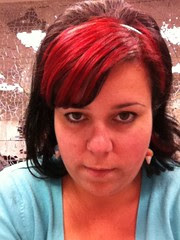 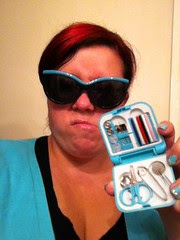 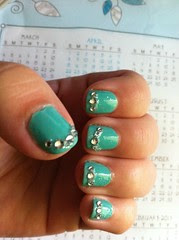 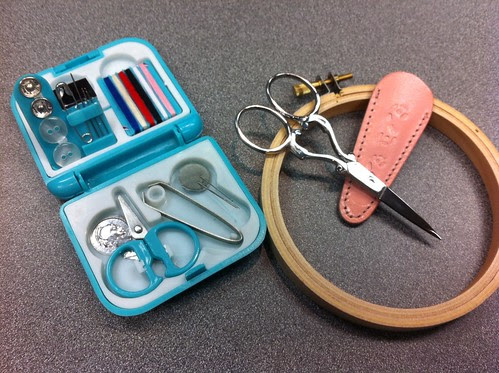 Regardless of my matchy-matchy blueness, I was so excited to see some of my fellow embroiderinos who had traveled from near and far across Southern California to be there. I was so excited to meet Jessica Charleton (nee Kallam) in person after following her online for years. It was great to meet some new friends, too, like Drop Dead Quirky who I didn't realize was Shannon's real-life friend (jealous!). Of course, Shannon (Giggly Mama) and Mark (FilmResearch), and Ellen Schinderman were all great to see again -- old friends are the best friends, right? I think I successfully scared off Jenny Hart, who has been an embroidery hero of mine for many years. She was so sweet and cute and funny (you know her darling blog? Her cheery emails? SHE'S JUST LIKE THAT IN REAL LIFE!!). I was a bit of a dork and she probably left thinking that I am the Queen of the Weirdos (I mean, with that Peggy Bundy hair style, who wouldn't run the other way?!). I hope our acerbic little gossip group didn't terrify her too much because we really, really, really liked her!!


Okay, so, the show: Boetti is a collaborative artist, which is controversial in itself, and for this show the pieces on display were hand embroidered LARGE pieces that were stitched by people (mostly women) in Afghan refugee camps. Part of the "controversy" if you want to call it that is that the ladies doing the work didn't really know or possibly couldn't understand what the end-vision was for each piece. They were stitching away for hours and days and weeks on these gigantic maps and coded alphabet 'samplers' without knowing exactly what the end product would be or how it would be represented. The pieces ranged from maps to alphabets to icons of people and machines -- some of it likely to be unfamiliar to the people doing the work. Could they know if these things would be offensive? Political? Dangerous? Inspirational? Admittedly, looking at the gallery online, it's unimpressive. You really have to see these works with your own eyeballs to appreciate the labor, the craft, and the SCALE of these projects.

As an adjunct to the gallery exhibit, Jenny Hart was asked to create a collaborative piece that would be assembled in a similar fashion. She chose a piece of prose (known only to her) and the words were written on individual slips of paper. Participants - we "stable of stitchers" as well as students - would choose a word at random and then select how it would be depicted: lowercase, backward, cursive, repeating, etc. and write it on to a piece of fabric. The only "rule" was that no one could stitch their own words. The "stable stitchers" were on-hand to kind of get the ball rolling and assist students who may not have embroidered before. It was a lot of fun to interact with students who popped in to the room to see "what's this?" between rounds of Drag Queen Bingo and see how they went from "oh, I can't do this. I don't embroider" to "man! I'm almost done but I have to get back to the dorm! Can someone make a call for me and tell them I'll be 20 minutes late?" All of the finished words will be assembled by Jenny Hart and the final piece will be presented on May 31st (open to the public!) at the Fowler Museum.

The first word that I selected was "did" and, true to form, I chose blue floss to work with. 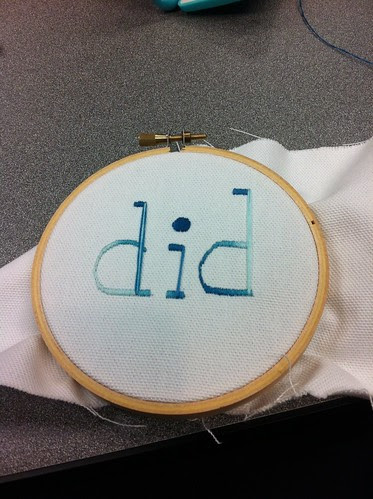 Our end of the table immediately clicked and the hours literally flew by. We talked about everything (and everyone!) under the sun and had a blast. I only remembered a few times to click some pictures and Amy (DDQ) successfully evaded them all. She's a crafty one! 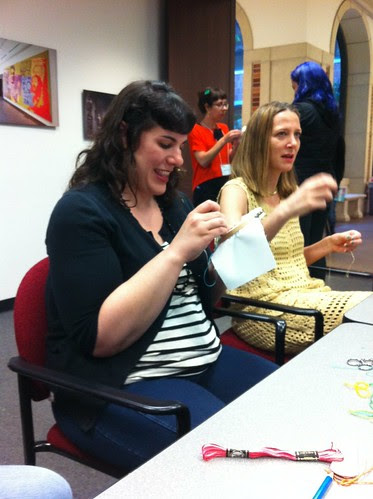 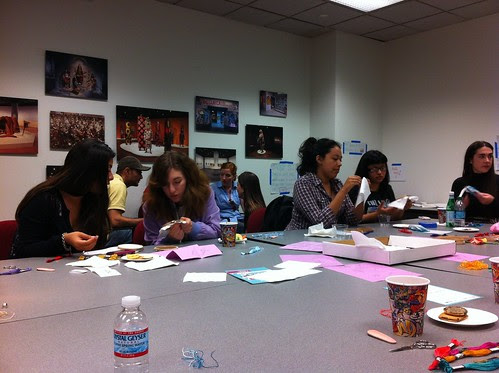 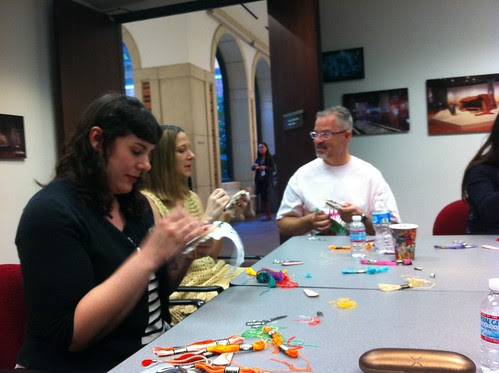 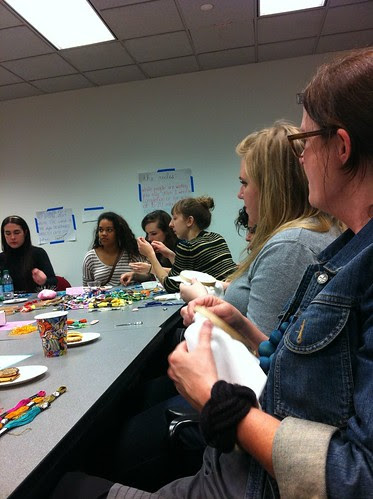 It was a great night - very productive, lots of fun. I sincerely hope that we can make it happen again sometime, even if for no real reason!

Also, I have to thank Jenny Hart again for including me in this group. I sincerely appreciated being a part of it. And I also want to highlight her generosity in letting me keep my scissors (squee!!) and gifting me with a set of the new Shy Girl/Shy Boy pillow cases to embroider!