A couple of weeks ago, we finally got to visit Austin, TX! Ryan has some friends there and there's so much to see that we've been wanting to plan a trip for a long time, but it finally worked out since I had a business trip there and so I bought Ryan a ticket to tag along.

Our first night we went to dinner with some of my work mates to Moonshine, which had a relatively small menu but it all looked so good that we couldn't decide. We literally sat in the restaurant for about 45 minutes trying to decide who would order what. Ryan settled on the chicken fried steak, which was as big as his head (in this photo it's actually bent in half so it looks smaller than it was). Texas sized portions, to be sure! 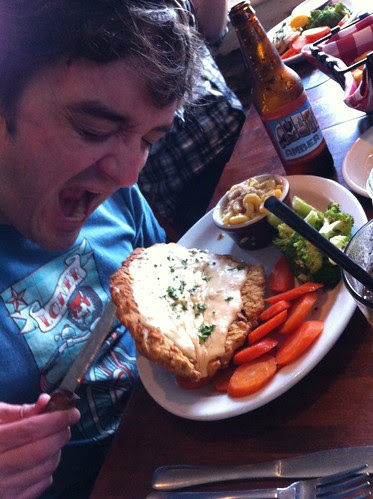 The next day while I was working, Ryan went and met up with his pal Billy who he hadn't seen in about 12 years. They spent the day exploring the city a bit; Billy had moved away for a while and just moved back so he was interested in seeing what was new and different. They took some excursions to Barton Springs and other local spots and came back that night to meet me when I was done. We asked the concierge for a recommendation for somewhere quiet for us to catch up and chit chat and she recommended Easy Tiger. It was a cool place but definitely not quiet. It's more of a college crowd, instead of the bikers that had taken over all of 6th street for the ROT Rally (biker rally).

The following day, I had to work again so Ryan met up with his buddy, Riley, who he hadn't seen in 10 years. They hung out all afternoon and I caught up with them at the Jackalope but it was starting to get busy (Friday night, plus the bikers were coming out in full force) so we went up to The Grackle, which is an out-of-the-way dive bar with perfect atmosphere. It was supposed to just be a detour, but we ended up staying all night. Totally different crowd. Yeah, it got busy, but everyone was unwinding after a long week so it was mellow instead of rowdy.

Saturday was our big day to explore the city, so we went up to South Congress and did some toodling around. There are a few thrift stores and lots of vintage stores, but I expected everything to be pretty well picked-over. Instead, we scored some great souvenirs, including these vintage 1980's Converse for Ryan ($20!). 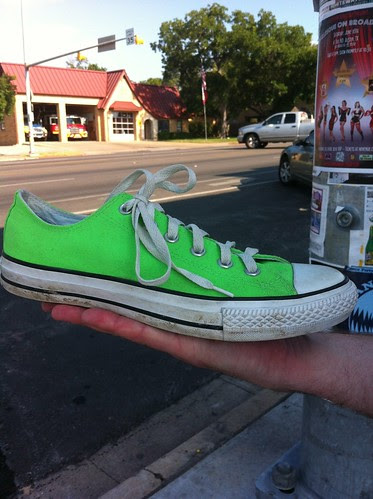 We also stopped by Vulcan Video, where Riley was working. It's an AMAZING video store. I know that sounds weird, but it really was awesome. They specialize in hard-to-find titles and formats (they even have their original VHS collection) and most of the "good stuff" is categorized by director or genre. We spent probably an hour in there and couldn't buy or rent anything since we aren't locals, but it was still great to see. 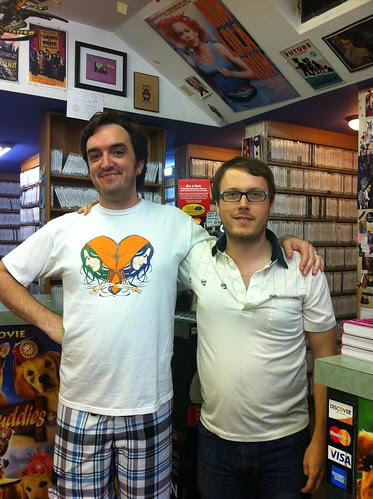 One of the places that Ryan and Billy had gone was Fran's hamburgers. Back in the 90's Billy had founded an art studio and they made the sculpture of "Fran" on the roof (below). 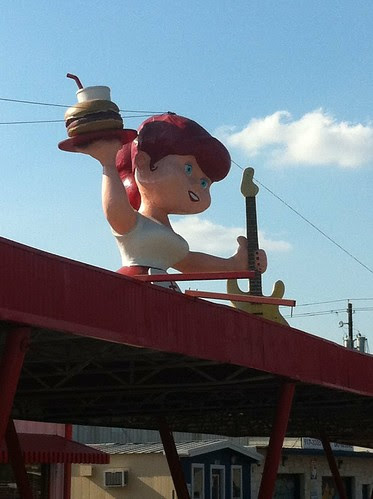 I had been pestering Ryan to get a haircut for weeks, and he totally ignored me. SOMEHOW the Austin heat and humidity won out, so when we passed Bird's Barbershop, he relented. 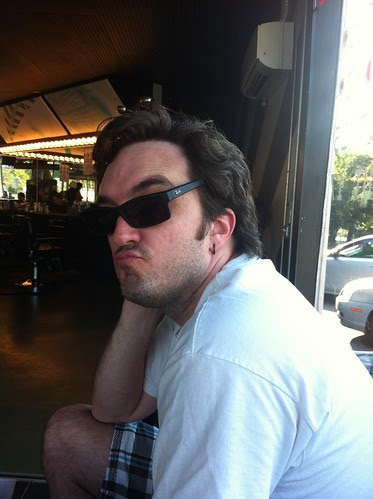 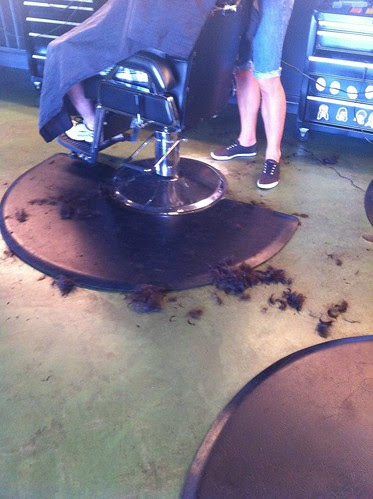 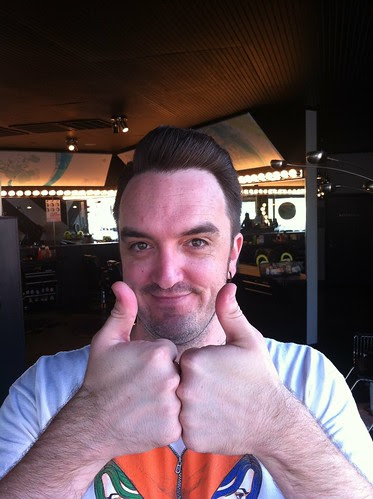 He lost about 2 pounds of hair and lowered his temperature by about 30 degrees. He was so pleased with the cut that he told the stylist (Mark) that he will come back to Austin just for the haircut.

After that, we grabbed a grassy spot near the Congress Bridge to wait for the nightly bat exodus. Millions of bats live under the bridge and fly out at dusk to go eat bugs. 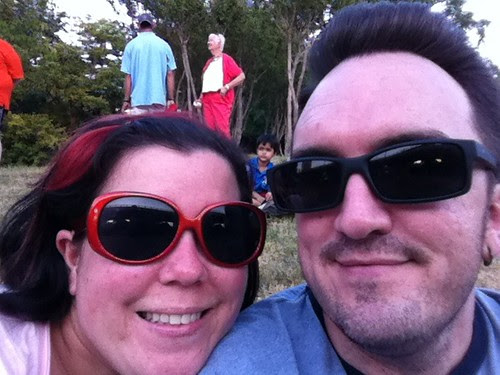 I was wearing my Rigatony's shirt that I bought in Tempe, which I adore. 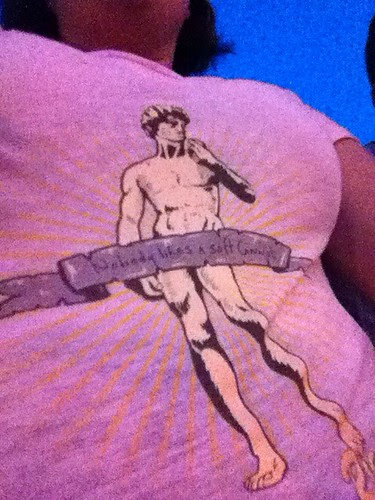 Thousands of people turned out to wait for the bats.... but none came! Bats are sensitive to noise and if it's raining they'll often wait until very late at night to come out. I think the constant parade of bikers scared them off. The bikers would cross the bridge by the hundreds and loop around about every 2 minutes. We'd heard that the night before, the bats didn't come out until about 9:30pm and even though we stayed until nearly 10pm, we only saw a few come out at a time. Maybe 20-30, instead of the millions that were waiting, so we called it a night and went back to the hotel. 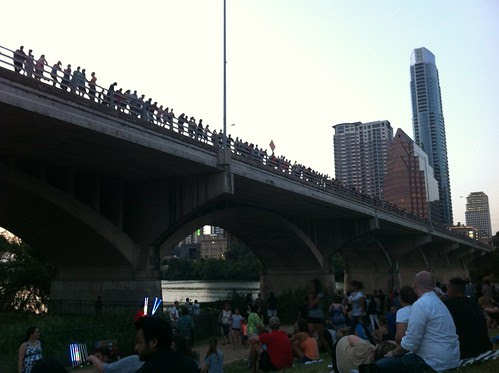 Sunday was our last day, and we'd been advised to see the animatronic LBJ statue, so we headed over to the museum. Unfortunately, almost all of the presidential stuff was under construction, so only the First Lady's section was open. It was surprisingly interesting. Plus, Ryan got an art boner over seeing an ACTUAL Norman Rockwell piece of Ladybird Johnson. 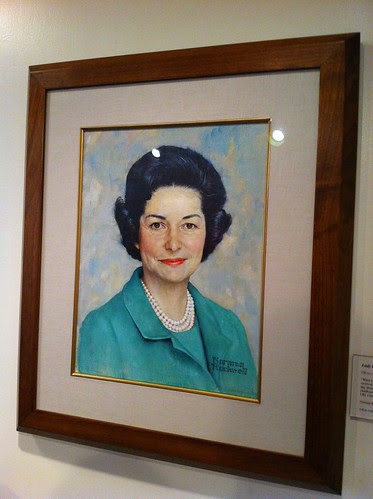 Outside the museum is a life-sized statue of LBJ who was gigantic. Ryan whispered a secret in his ear and made him smile (for reference, Ryan is about 6'1"). 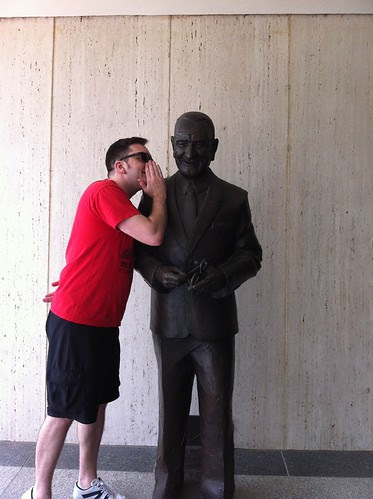 Then we headed back through Austin to look at some of Billy's murals. It was swelteringly hot - 106 and humid - so when we stopped to look at the Joseph's mural, I stayed in the car. The window tint gives the pictures a "hipstamatic" look. 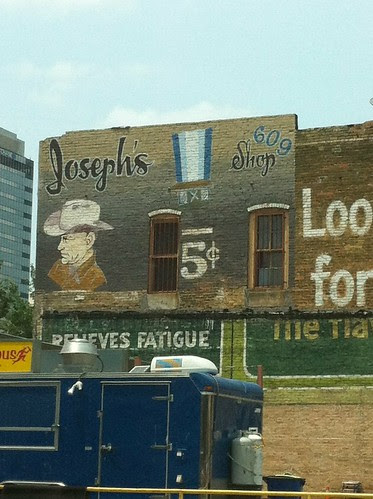 Our favorite was the Greetings from Austin mural. It's on the side of the Roadhouse Relics building at 1720 South 1st Street in Austin. A lot of visitors expect it to be near the airport or in the general downtown area, but you have to go looking for it. Ryan "bent the font" for a few photos and then we went across the street to Flashback, which is a vintage clothing store that Billy and his studio made the sign for. 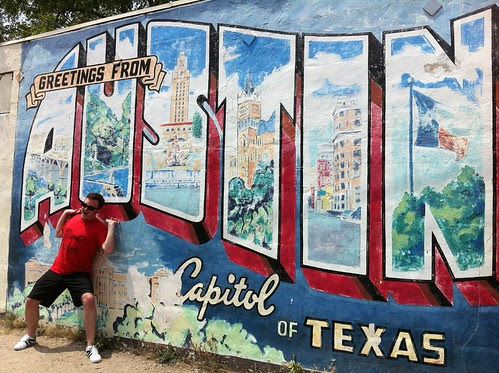 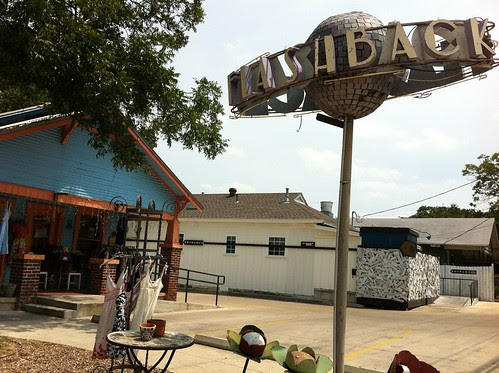 After that, we headed over to Blue Genie Studios, which is the studio that Billy founded with his art partner. The giant foam genie on the roof is spectacularly impressive in person. 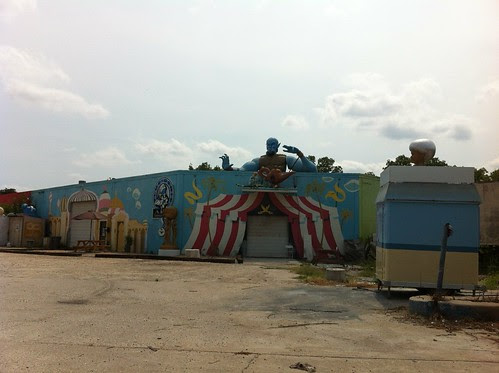 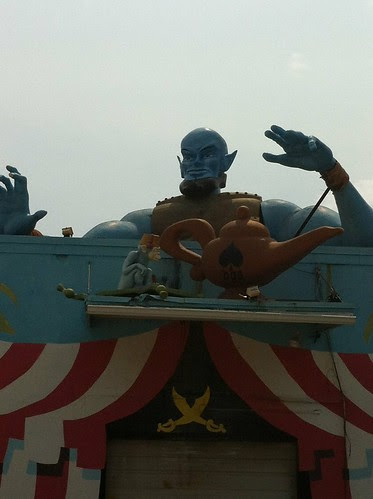 The statue of "The World is Yours" is hands-down my favorite. If I wasn't a law-abiding citizen, I would have shoved it in the trunk and driven home! 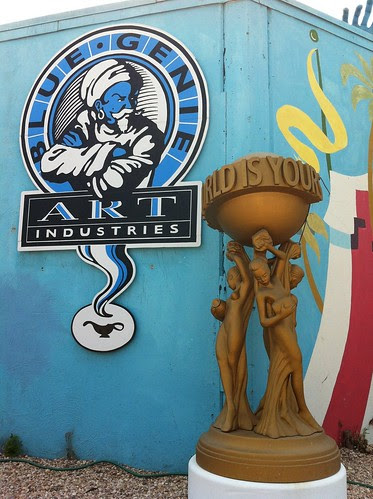 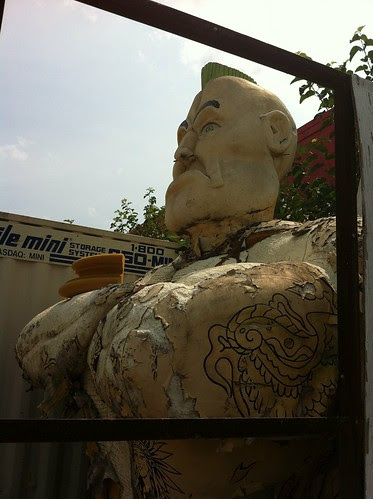 The day was sorta cooling off, but felt hotter than ever. We'd walk around a bit and think "man, it's hot" and then get into the air conditioned car and almost faint. It wasn't until you were inside that you realized how close to heat stroke you were. 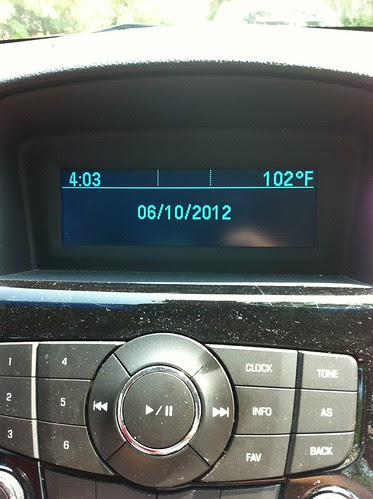 As we were driving, I saw a hand-made sign for a shaved ice company and decided to follow it. It was a little set-up in someone's driveway and we dropped in and ordered two right away. The best $2 I have ever spent! We sat in front of their house for the next 30 minutes and ate our shaved ice with grape syrup. It was sooooo good! 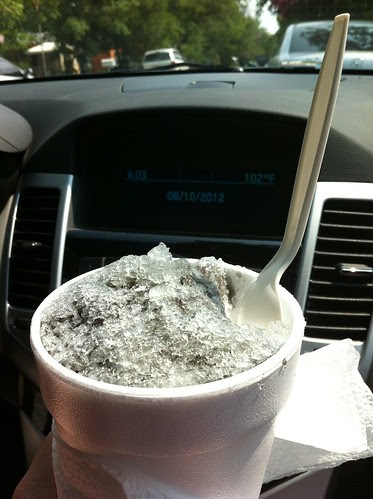 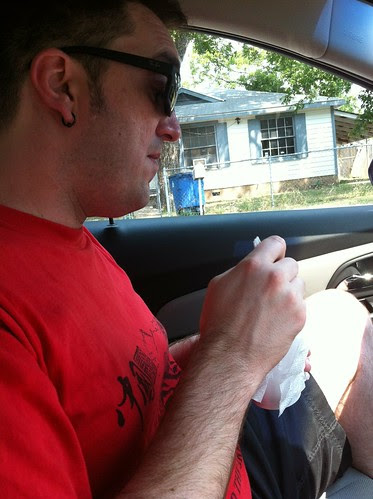 We still had some time to kill before going to the airport, so we looked on Yelp for some interesting stuff in the area. One of the listings was for Casa Neverlandia, which is a private residence. The house itself is a giant art project, covered in tiles and paint and sparkly things. Pictures really don't capture the beauty. 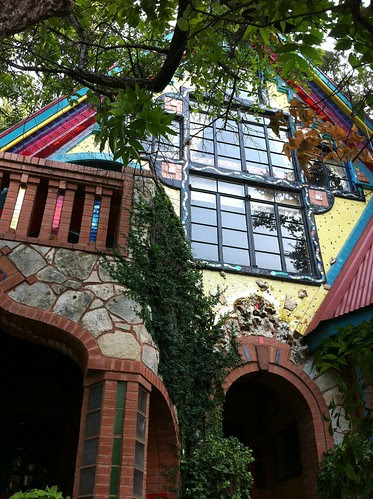 The owners of the house allow for private and self-guided tours, but since we didn't plan ahead we didn't want to bother them by calling "Hi, we are outside your house! Can we come in?" 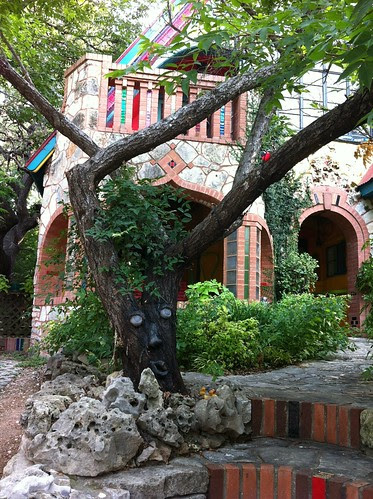 The trip home was uneventful. We were exhausted and a bit heat stroked and just wanted to sleep on the plane, but the gossip girls behind us were too loud. They were super annoying and we just made fun of them the whole time, so it was actually kind of fun.

I have no idea how to end this post, but I loved Austin and would love to go back when it's less hot - maybe in the fall. Ryan has been invited to a comic convention there in October, so we may be back in 2012!