Back by popular demand: Fourth of July at Sea World!

We started off our day with a buffet. WIN! Sea World has all kinds of economical dining options, and there's a new one for the summer that is a picnic buffet that is extremely cheap. I think it was like $9 and it's all-you-can-eat with a menu of BBQ chicken, sausage, hot dogs, macaroni and cheese, several salads, corn, breads, beverages, and a dessert bar. It really was a score.

Somehow, I didn't end up taking many pictures, but I took some videos with my Flip camera, which I converted into stills.

This picture is from the Blue Horizon show, which is CHEESY beyond belief, but still kind of awesome. This has replaced the old "dolphin show" so this is the only place where you'll see dolphins doing acrobatics. Plus, there's a whole aerial aspect to it (hence the wires on the lady, she rides the dolphins around the pool and then is pulled high into the air to do acrobatics). 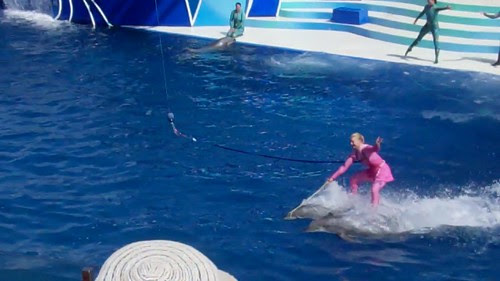 The new orca show was pretty cool, too. 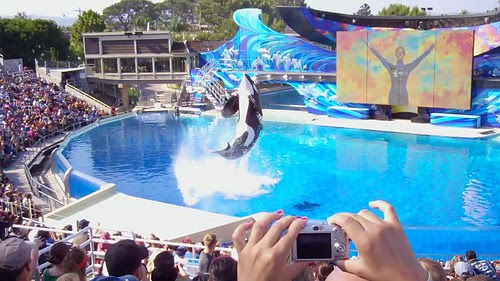 We also got our first look into the new Turtle Reef, which replaced the manatee exhibit. 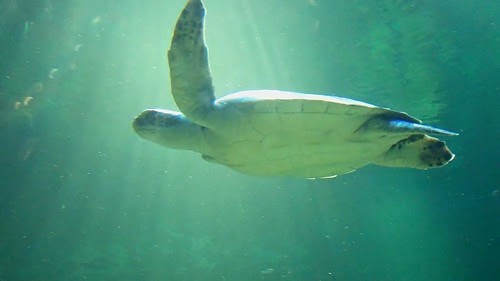 We also watched the Sea World ambassadors walking a capybara on a leash, out to meet and greet people. Yes, you can pet a capybara at Sea World! 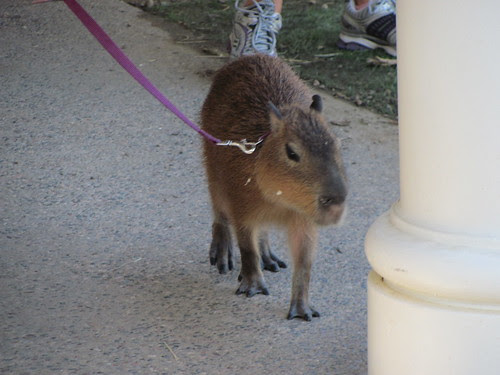 We also got tattoos. No, scratch that. Better than tattoos! GLITTER TATTOOS!! (Obviously, I wore an obnoxious giant hat to keep the sun off my face - poor Kate had to be seen in public with me!) 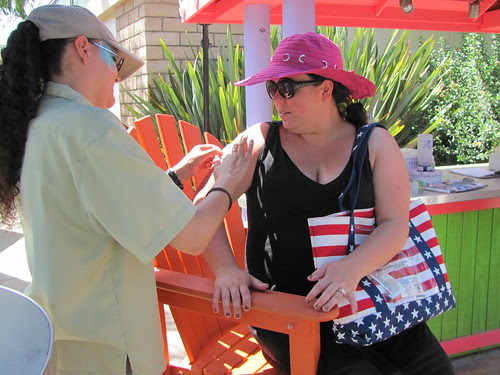 Mine was a cat face with a crown called "Princess Kitty" which I changed to "King Rocket" because it has big, kitten ears like him. Unpaid advertisement: this glitter tattoo rocked. It stayed in place for 10 days before it started cracking and peeling. That included sweat and sunscreen and daily baths for 10 days. And for just $10! The face-paint that most people were getting sweats off immediately and costs nearly triple. Glitter tattoo= great value! 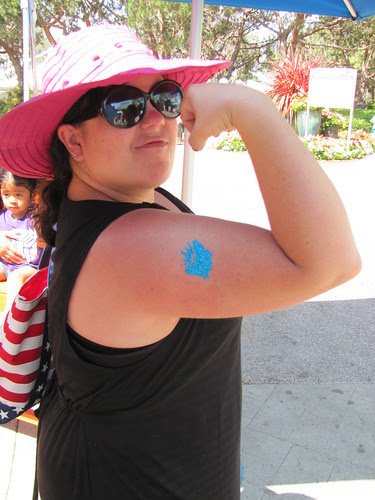 Kate got a dinosaur, because that's how she rolls! Also, the new dino exhibit was opening at work so it was a fitting tribute! 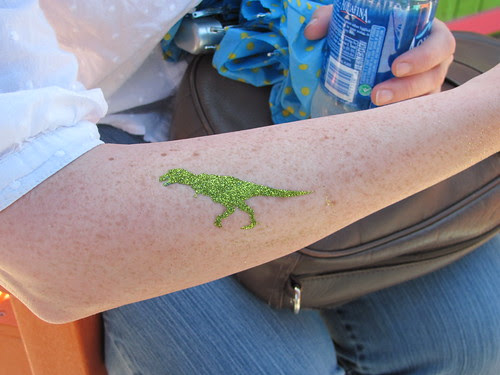 Last year, I had brought a cache of glow in the dark bracelets for Kate and myself which was really fun and I ended up passing a bunch out to the kids around us and it was really fun and made me feel good. So as I was loading up my stock of bracelets Ryan asked "oh god, are you going to be THAT lady? The bracelet lady? Creeping around, looking for little kids to give stuff to?!" and I said YES. 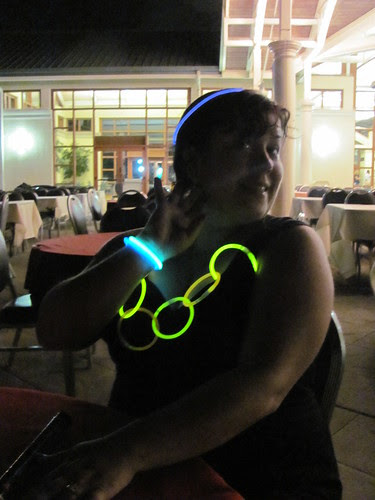 I started out by making myself lovely with glowy goodness, and then when we found our spot to watch the fireworks I distributed the remaining bracelets to the kiddies nearby. Let me tell you, NO ONE thought I was a creep. The parents were grateful for the distraction, the kids LOVED it - heck, who doesn't like something for free? So it was a winner. Except, again, Kate had to hang out with me and be super embarrassed. Are you detecting a pattern here??

Seriously, our Sea World tradition has turned an otherwise lame holiday into a whale of awesome!... a pool of fun!... a holiday I can flip for like a dolphin!... You know what I'm saying.