Thanks to BlogHer for bringing MORE cool people to our neck of the woods! Erin, who you know and love from Out of Character and Sock Zombie, came out to San Diego and attend the conference. I was debating whether I should check it out or not... but it all came down to laziness. Basically, I'm not trying to make money from this blog or build an empire. I don't have any real designs other than to keep a real-time journal for myself and my friends to reference and I pretty much SUCK at that. So, shelling out hundreds of dollars hardly seemed worth it to go to a conference and be all anti-social and hide in my hotel room. ALTHOUGH the upside is that all the ladies with blogs come out and have fun and I could meet some people and make new friends... well, in the end I didn't go but don't worry. I still made new friends.

See, Erin went, right? And she knows loads of people and she's not a shy violet like me, so she gets out there and networks and junk. And so she meets people. And I text her constantly from the car wash where I'm avoiding eye contact because I don't have a bra on and I have sweat rings forming and my baloney pits are growing. And I hide out in my living room. So she goes alone and meets people and then she brings these people that she's met to be shanghaied at lunch by me, served up on a platter (or a bucket, as it were) and then I get to pinch down on them with my lobster grip and never let go. In the end, I make new friends, they have a new follower - EVERYBODY WINS. (Which also translates to "no one trusts Erin to arrange a lunch date")

SO. When Erin said she was coming to San Diego, Kate and I begged and pleaded for her to play with us. She agreed after all of her other dates cancelled! Hooray! So Kate and I drove down to downtown San Diego to meet Erin at her hotel. Immediately, we drove her to a mall basement parking lot, as the Ambassadors To Local Culture that we are. At the mall, we met up with Phil, who Erin was meeting for the first time and we had only a vague description of who we were looking for (blue shirt, camera bag) and so we were staring down every man at the mall "are you Phil? No? Well, close enough - let's go!" until one of them agreed to come with us. He was nice enough, so we kept him.

We wandered around the Gaslamp District, not really knowing where to go. We needed some lunch and probably some booze, but where? Honestly, we just kind of ended up at Rockin' Baja Lobster but it worked out perfect. We got a great table next to the open window, where the breeze would dance in and dry my sweaty brow. 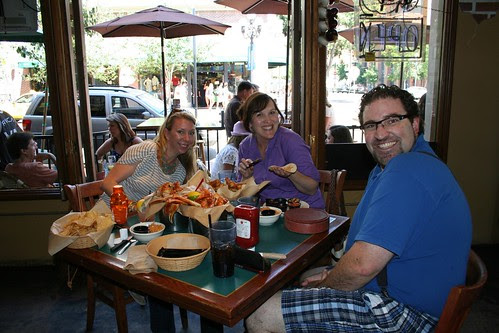 We then ordered lunch, which comes by the bucket-ful. We just kind of ordered one of everything: shrimp, lobster, crab legs, steak, battered fish, and chicken. Oh, and a cauldron of guacamole for the side. And extra butter. And some lemon. And more napkins, please. 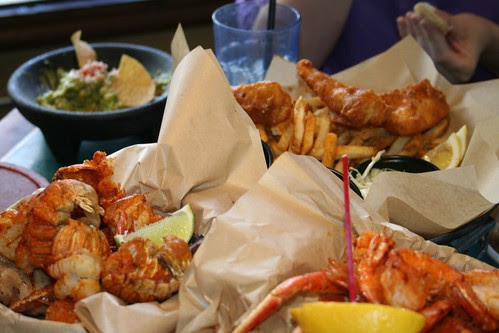 It was decently tasty and I think I won the "clean plate" contest by leaving just a bucket of shells behind. TAKE THAT, lobster!

After I ate an embarrassing amount of food, another bloggy pal came to meet up with us and I got to meet the world-famous Leah Peah! She was so sweet and mellow and I probably scared her away by talking TOO MUCH about Disneyland and being a geek. But all the same, she sat at my table! So now I get to claim her on my List of Awesome People That I Have Met.

After Leah went home, we started our head back toward the car so we could get Erin to the airport in time for her flight home. Along the way, I diverted the group inside the Horton Grand Hotel which is a funky old historic hotel that is rumored to be haunted. Our friends stayed there once (and swear it's haunted) so I had been into the lobby which has historical artifacts and a horse! Why? I have no idea. So I made the group come inside to look at it. They happily complied. 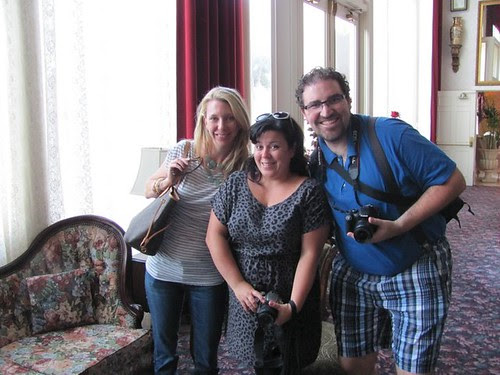 We didn't see any ghosts, but when we crossed the street back toward the mall we saw this graffiti art piece by Os Gemeos telling us not to believe the hype. So maybe there AREN'T ghosts after all... 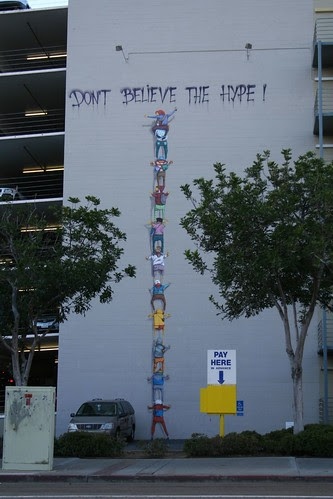 After bidding a fond farewell to Phil, Kate and I took Erin to the airport with plenty of time to check in and get comfy before her 8pm flight. Then we hit the highway. About 20 minutes north of San Diego, I got a text from Erin that her flight wasn't until 8:30 and she'd breezed through security so now she had lots of extra time to waste in the terminal. Kate and I both felt terrible that we'd left Erin. Not just that the airport is boring but that we could have sat around talking for another half an hour! Or gone to see the famous tiki bar! Or meet Shamu! Whoever was in charge (still undetermined) should be in trouble for that one.

I seriously suspect that I talk about Disneyland too much as well, which is where I was on the day you posted this. We were there from Northern CA for 9 days (6 Disney days) and I kept my eye out for you the whole time. Not stalkerly-like or anything - I just hoped to let you know in person that I really enjoy your blog! And I'm not even related to you!
The first time I read it was a little over a year ago and I liked it so much that I spent a whole sick day on my iPhone blog reader (never even calling in to see how my classroom was doing with a sub!) reading back as far as I could get. It was a little creepy to read at first, though, because there was SO much that I identified with that it felt kinda like a joke on me: Let's write a blog about Carrie but change some things and make them more hip. Make her husband an artist instead of a PT. And make her dress better. And have an etsy shop. .
So, since I never saw you (shocker) I decided to leave a comment to tell you all this. This seemed like the perfect post to do it on since it sounds like you might need a confidence boost! Don't be afraid to make new friends because you are a cool geek, and making friends is super-awesome!
Ack. I wrote a novel!