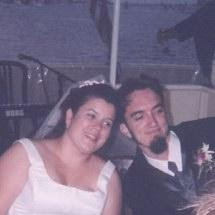 July 7, 2001
I feel like I have told this story a bunch of times before, but I did a quick blog search and didn't find the complete story, so I'll tell it here and then never tell it again. Deal? Deal!

Ok, so July 7, 2001 Ryan and I got married on the M.V. Phoenix, which was a 3 story paddle wheel glass bottom boat that operated out of the Balboa Fun Zone in Newport Beach, CA. Originally, we were supposed to use the Tiki Boat which was owned by the same brothers and so we decided to be very sparse with decorations and invited our guests to dress in Hawaiian casual attire. At the last minute we had to upgrade to the Phoenix because we had more RSVPs and "I think so and so is coming too" than originally planned. Our guest list was 75, which swelled to over 120 and even more showed up to the actual wedding (I think final count was something like 136) and all of those people wouldn't fit on the small Tiki Boat. Luckily, the boats were docked together, so the day of the wedding, the Captain just loaded everyone on the Phoenix instead of the Tiki.

The Phoenix was originally a tourist attraction on Catalina Island. The giant glass bottom plates afforded incredible views of the kelp gardens of the island for more than 60 years. The walls of the boat were lined with photos of celebrities who had toured the island on the Phoenix, including three US Presidents.

From Tales of Balboa:

In 1930 the 22-year-old glass bottom boat M.V. Emperor was destroyed in a massive windstorm while at its bow moorings in outer Avalon Bay. The M.V. Phoenix was resurrected from the salvaged wreckage of the Emperor and built from almost identical plans in only six months. This beautiful and historic 105 foot 112 ton side-wheel glass bottom boat was built with four-inch thick Alaska cedar planking at the Wilmington Boat Works in Long Beach and launched in 1931. The Phoenix is the largest paddle-wheel glass bottom boat in the world.

It is widely rumored that the Phoenix was the boat featured in the Doris Day movie "The Glass Bottom Boat" however it was actually the Nautilus that was in the film (screen capture from the movie below shows the boat and it's name across the rear of the vessel: Nautilus, Avalon). It's kind of funny to me that this rumor persists, since the Nautilus is a standard glass bottom boat - it's a small craft with a single glass plate along the bottom with seating all around, which is totally unlike the Phoenix.

Picture of the Phoenix, courtesy of Tales of Balboa. 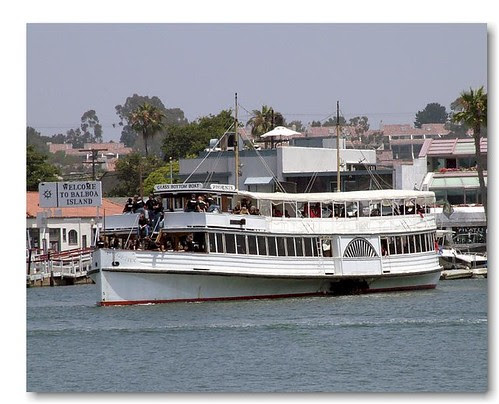 In 2006, our 5th wedding anniversary was approaching and we decided to celebrate with a brunch cruise on the Phoenix. However, the boat had been sold to a restaurateur who wanted to relocate the vessel to the San Francisco Bay Area to become a floating restaurant. The Phoenix left Newport Harbor on Saturday, June 10, 2006 around 2pm and began its trip north traveling at about 4 knots. As noted by several news reports, the new owner attempted to christen the ship by breaking a bottle of champagne over the bow, but the bottle did not break, which is a bad omen according to boating lore. The owner was unfazed and successfully broke the bottle on the second attempt and also commented that he would not change the ship's name, which is also believed to be bad luck. However, by the time they reached Malibu on Sunday, June 11, the bad luck found them. At 7am, the ship's crew noticed a 2" x 6" fracture in the glass bottom of the ship and it began taking on water. The crew tried to pump out the water until the pump failed about an hour later and they put in a distress call to the Coast Guard. The ship was carrying ten 55-gallon drums of reserve diesel fuel, plus 200 gallons of fuel in the ship's gas tank which were all still on board when the ship started sinking.

The ship's crew and owners stayed on board the sinking ship, saving whatever belongings and memorabilia they could, but ultimately the ship sank. According to news reports, the ship took only four hours to completely sink into the water. The ship remains intact approximately 800 feet under the surface about 2 miles west of Zuma Beach. Because of the depth of the water and the difficulty in trying to recover the ship, it is likely that it will never be recovered.

Photo of the Phoenix sinking, courtesy of AP: 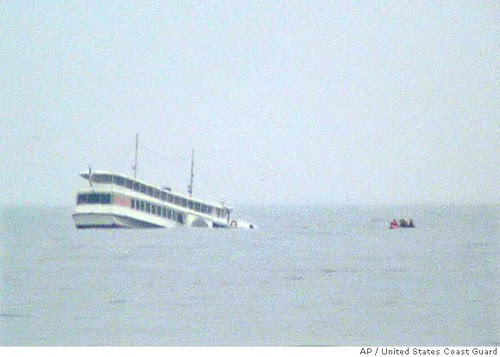 It's a poignant story, if you ask me. This ship that was born from the remnants of other ships (hence, the name The Phoenix) ultimately found its grave in the sea. Perhaps it had been skirting the inevitable for 75 years, however most think that the 450 mile trek from Newport Harbor to the Bay Area was an unachievable goal. Traveling under the power of the elderly paddle wheel, was it folly to think it could have made the trip alone? Especially considering the fuel supplies onboard? Maybe the owner was overly ambitious or maybe the ship wasn't ready to leave Southern California - it had ferried the same 26 mile area for decades, delighting uncountable numbers of passengers with the beauty of the kelp forests off the local coasts. Maybe it just didn't want to see the murky waters of the Bay? I guess only Poseidon knows.

The Phoenix was scuttled! My Dad was chief engineer for many years and knows every inch of her and he says the viewing wells could be completely removed and she could still be underway. Lies and treachery! What really hapened? The crew and captian won't comment publicly?