My first car was a 1971 Karmann Ghia. My dad's longtime girlfriend, Sharon, (who was sometimes called my stepmom, just to shorten the conversation) had owned this car since the 70's and I think she might have been the original owner. It started off orange, like the picture shown below (not my actual car) but sometime in the 80's her son had a friend who's father owned an auto detailing shop and the boys were really interested in painting a car, Sharon let them take her car to practice on. They settled on a color that we all called "toothpaste blue" and went to town. It wasn't a professional paint job, by far, and the interior of the car was still orange (around the window casings, etc.) but it still looked pretty neat-o in blue. 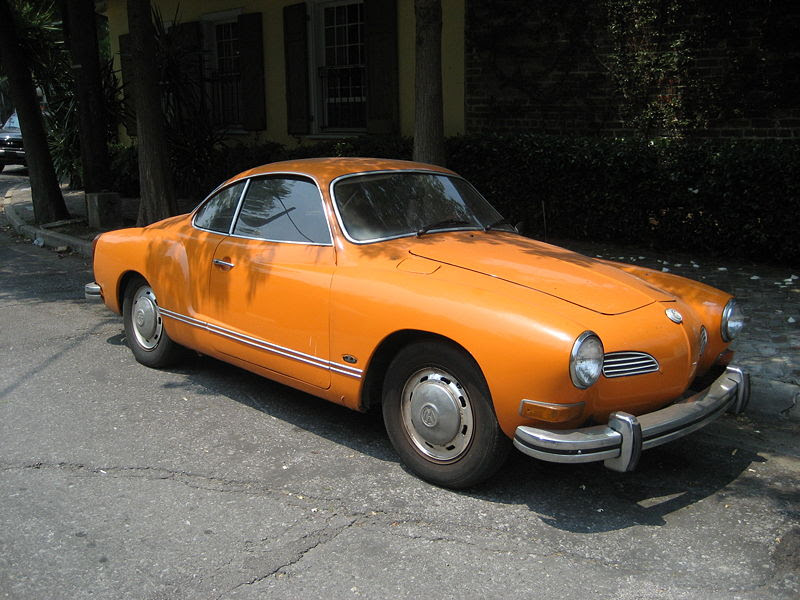 I was taking an ROP class in the evenings after school, which was at another high school and so I needed transportation. Sharon offered me the Ghia (thereafter called "Mia's Ghia") and so I took it. After driving my mom's Honda with it's fickle stick-shift transmission, I loved driving the Ghia. I don't think I ever stalled it - the clutch was worn and loose, so as long as you eased off the clutch slowly, it never jerked or faltered. (Mom's Honda was super touchy! You'd have to ease off the clutch with surgical precision or else it would jump or stall. I hated it.)

My family lived in the canyon above the valley where I went to school, so it was a 20 mile each-way trek to school and back daily and the Ghia handled it like a champ! That is, until it didn't.

It was finals week and I was on my way to school for one last test and then a full day of work. I was wearing dorky 'comfy' clothes (not that I wasn't ALWAYS dressed like an idiot) because my ROP class was over and I was now a certified preschool teacher - and the school where I'd been doing my internship had hired me on for the summer. Lots of the teachers wore stretch pants and long shirts and I think I was still in my babydoll dress with stretch pants phase, so I was wearing something like that, but something worn and dumb; something that I didn't mind getting fingerpaint or banana pudding on.

I was driving through the canyon when all of the sudden, the car filled with smoke and started slowing down. I pulled off to the side of the road and got out and saw flames coming from the engine compartment. I reached into the car and grabbed my purse and my favorite Tinker Bell ornament that was hanging from the rearview mirror. After that, all I could do was stand and stare. The nearest house was about 5 miles away and the nearest call box at least half a mile behind me. A few cars drove by, but no one stopped - what could they do? This was the pre-cell phone era, so all anyone could do was stand there and watch me cry. A few minutes later, a big rig truck pulled over and the driver got out and started hosing down the engine case with his fire extinguisher. The flames were too big to go near the hood of the car and his little extinguisher didn't do much to stop them. It ran out and he stood there, staring at me, saying he was sorry. He'd called for a fire truck from his CB radio so help should arrive shortly.

The fire engine eventually did arrive and they put out the fire. In its defense, the firewall between the engine and the interior of the car held up remarkably well. The smoke was coming in through the heating duct, which was basically just a tube from the engine compartment to the interior - it piped in the heat from the engine, but there was no knob for adjusting - you'd just pull up a handle and it had 2 settings: open/closed. Another driver recognized my car and had called my house, just in time to catch my mom before she left for work so she came to pick me up.

One of the firemen got into the car itself and rescued some of the artwork that I'd created for my preschool class. It was Around The World week and the day's study was focused on England, so I had brought in some props, including a jeweled gold crown. The fireman was covered in soot (as was I) and he came over and put the crown on my head. My mom started crying and wished she had a camera.

Eventually, we got it towed and found a guy who could fix it -- one of the DIY mechanics who tools on things in his own garage -- and that was when I took the first pictures of my car. I'd never even thought about it until then. It's not like the 50's when everyone posed in front of their cars. These are the pictures. ADMIRE MY AWESOME BUMPER STICKERS! 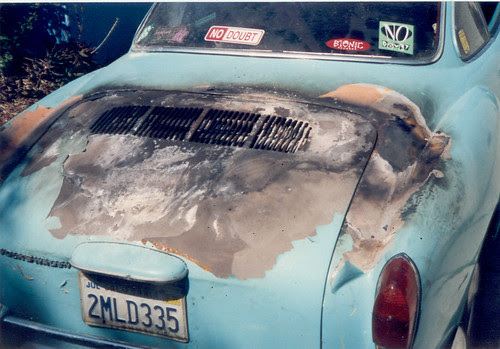 the fire burned off the layers of paint, so you can see the orange 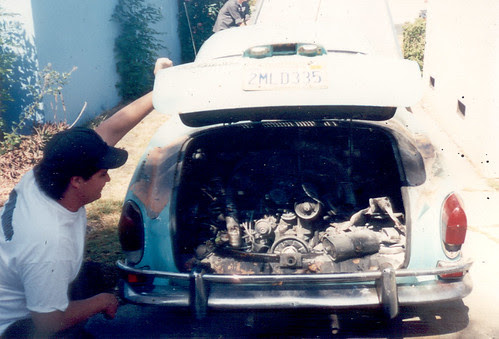 the engine was basically gone. It was cinders and dust.
It turns out that the source of the fire was an extremely common one for Volkswagens of that era. If you're familiar with the engine, it's all powered by a single belt that is in plain view when you open the engine compartment (seen below) and what's immediately next to it? The gas line. SO when the belt breaks, it flailed around and it smacked the gas line, which lead to gas spraying all over the hot engine and viola! Engine fire!

Fortunately, VW gearheads who like tooling on cars can build these engines in their sleep and will do it for a pretty low price, so the car didn't have to die there. I got a new engine put in and was off and running once again! I drove it for a couple more years before I got a new car and then it was kind of put out to pasture. A friend's mom bought it from me and drove it for a couple of weeks before some guy chased after her to offer her thousands of dollars for it. While Ghias aren't rare, they're not easy to find and VW lovers love them, so this man made her an offer she couldn't refuse - and why should she? She felt guilty and offered me money, but I turned her down. I was just glad that someone who really wanted this car had it. It was a fantastic little car and I still kind of miss it.

Maybe in a few years when my midlife crisis is at its peak, I'll buy another one, just for toodling around on the weekends. But this time, I'll get a convertible. And a fire extinguisher.
Labels: flashback friday

Oh Mia, you and I have SO many things in common it's just spooky. I drove a little MG Midget until it lit itself on fire in a similar fashion. It was not a GREAT car and I'm not sure I'd own another one unless I could have a different engine in it but I did LOVE driving it when it was running properly.

Well, at least you got yourself another one after that event, and yeah, your old car is really an eye-candy for car enthusiasts, and I'm sure the one who bought it is enjoying every second of having it on their collection.

LOL @ the fire extinguisher. That's really a problem with the 70's Volkswagen: their engines can easily caught fire! It's good that it was improved. And don't forget your fire extinguisher! LOL!