This year for the big Comic Con in San Diego, Ryan got an Artist Alley table (I was denied - boo hoo) so we'd planned on making a bigger to-do than usual. I was able to grab a hotel room when one became available in June (for those in the know, the tickets usually sell out in November, the hotels shortly after) which was a giant coup. Plans were made with Kate and Adam to come down and join in the festivities. Adam was going to drive all the way from Utah since we haven't seen him in so long and we were all excited about the 4 day slumber party of awesomeness.

Of course, it didn't work out that way. Ryan's big new project had some accelerated deadlines so his plan was changed at the last minute. He went down to San Diego on Thursday for the preview day of the show and had a great time. The plan was that Ryan would take the train to San Diego for the show Thursday, then come home that night to work, then we'd drive back on Friday where we'd meet up with Adam and Kate. Good times! Por supuesto, the train was wildly off-schedule and the return trip scheduled for 5pm was delayed to 11pm so he was getting pretty anxious. Instead, he ended up hanging out with Gonzo and crashing in his hotel room for the night. Ryan was able to go to the convention the next day, too, where there was all kinds of drama. The least of which was that poor Adam was struck down by the flu 3 hours into his 10 hour drive. He was too sick to continue and went home instead. We were sorry to have missed him, but at least he didn't have to witness the convention ridiculousness.

A wee bit of backstory: Ryan's buddy had started this big art project, which was going to be made into a book. The theme of which was based on an ex-girlfriend who was sorta starting to be a new girlfriend (at the time). A few months back, the two of them had a falling out and were no longer dating. No biggie. Only, she turned up at the convention and somehow had her own Artist Alley table (she's not an artist, but she has connections with the conference planners) where she was selling prints of the work that Ryan's buddy did. There were lots of artists already mumbling about why this girl was there, when so many working comic artists were denied tables, so a fan alerted Ryan's buddy to the situation. He went over to talk to her and ask her nicely to stop selling his artwork and she got pissy and called security and said that he threatened her. Security came and told him that he had to leave. They took away his badge and made him pack up his table. By the time the convention organizers came around, Buddy (goaded by Ryan, no doubt) called the organizers out on letting the girl have a table and they were kind of caught off-guard. Someone suggested that the organizers look at the girl's table - all exhibitors are required to sign a document agreeing not to sell bootlegged material. Well, the organizers were embarrassed because it was going to cause a fracas to kick the girl out, so they agreed to let Buddy stay. By then, everyone was over it and Ryan decided not to come back either, out of solidarity. There were lots of other issues leading up to the show with table assignments, etc. that were really crappy and we suspected that it all had to do with the Buddy/girlfriend issue.

ANYWAY, Ryan decided to throw in the towel and come home. He went to catch the 2pm train, which ended up being delayed again. This time until 7pm. He stuck it out and eventually made it home. The hotel reservations that I had were pre-paid and non-refundable, so Kate and I decided to take advantage of them anyway. BEST. DECISION. EVER.

Ryan got to spend the weekend home alone, working. Kate and I went out and enjoyed the weekend. We decided to skip the convention all together and do our own thing. The hotel in Old Town was right by the state park, which we had never been to before.

We started off the day by wandering around the shops and there was even a street fair. I bought some awesome stuff. Like this fingerpuppet! And also a hand-embroidered image of ducks with eyebrows! The man who owned the imported Asian emporium shop saw our interest in the embroideries and wouldn't stop talking about them because, apparently, he purchased them himself on a trip to Vietnam. The workers would spend months on these pieces (which he was selling for dirt cheap). The ducks are kind of awesome. 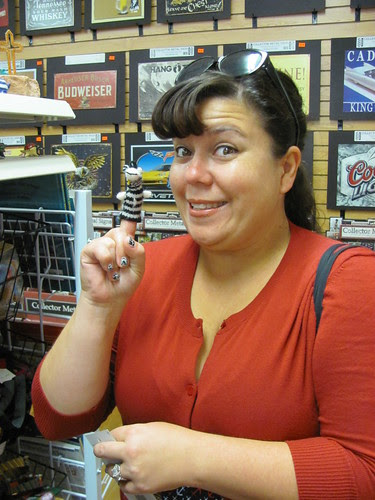 We hadn't realized that the state park is like a true Old Town. Historic buildings and all that jazz. It also was Stagecoach Days with lots of "innocent amusements" including sasparilla, games, and stagecoach rides. 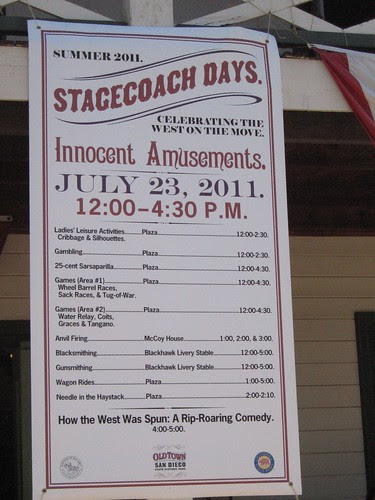 We went through all the buildings. Some were "educational" stuff, like the first restaurant in California. The first stagecoach emporium, etc. There was also a tobacco shop with a historic wooden indian. 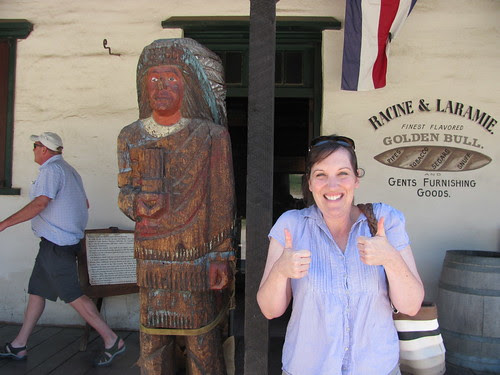 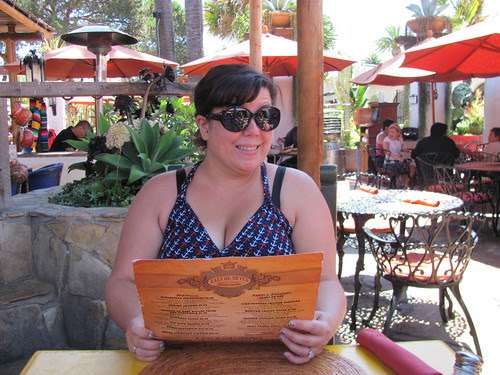 And then looked at exhibits of the Native Women of San Diego. Like this one. Happy bunch! 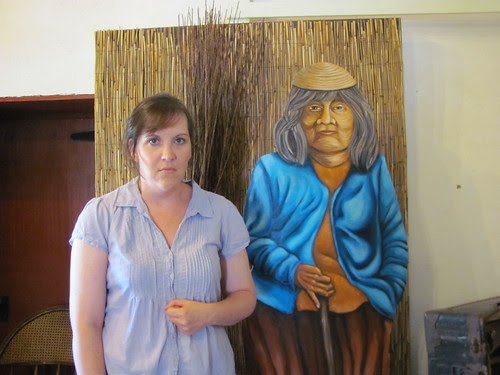 While wandering, we came across this offer for a ghost tour. WHAT!? So we decided to take the 11pm tour for extra spookiness!! 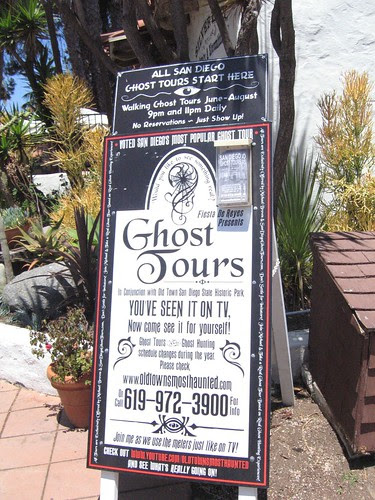 After wandering around through history for a few hours, we went back to our hotel room to take a foot rest break. We watched cheesy TV and rested and it was, seriously, the best thing ever. After a couple of hours, we decided to make a break for Sea World. WHAT?! I can stop any time! The plan was to see some fishes and junk and then the fireworks before hooking up for the ghost tour. The park was so busy, though, that we ended up leaving before the fireworks and went back to the hotel where we had a prime view of the fireworks from our own balcony. It was awesome!

After another small break, we walked back to Old Town for the ghost tour... 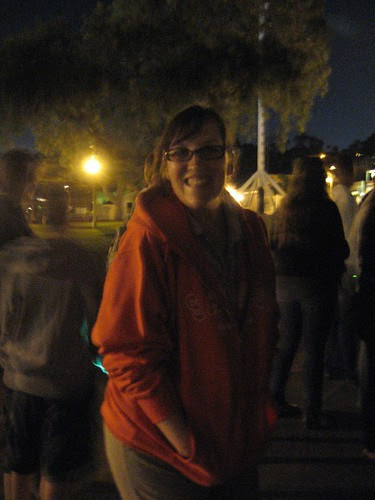 The man who led the tour was... flat? Boring? Too serious? He claimed to be a true ghost hunter. That he would come down to the old parts of town in the middle of the night to look for ghosts and take pictures (one of the things he kept impressing on everyone was that often you won't see a ghost, but a camera can capture it. To 'find' one, you simply take LOTS - hundreds - of photos and then examine them for slight differences, the difference being a ghost of course). He had some dry tidbits about most of the historical buildings and claims of sightings, many of which are patently false because the building itself is only a facade or wasn't there for hundreds of years.

He led the group down the street to the El Campo Cemetary. There the group wandered a bit and he told us of various sightings over the years. 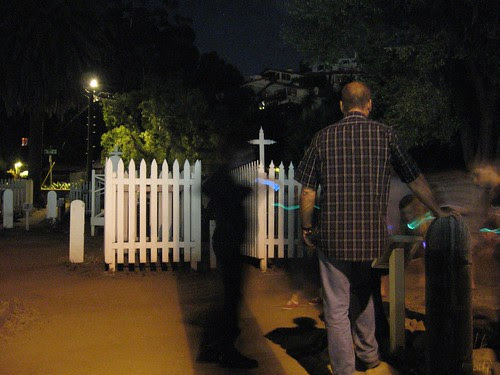 After we'd walked around a bit, he pointed out the gold washer markers in the dirt. Those are indicators of where human remains are. Most of them were not near markers or stones or in any way distinguishable as graves. The geological service had used sonograms to ping the ground to find remains, which extend far beyond the present-day cemetery and out into the street and even under the restaurants on the other side. Markers in the sidewalk and roadway tell you where they found one or more bodies. 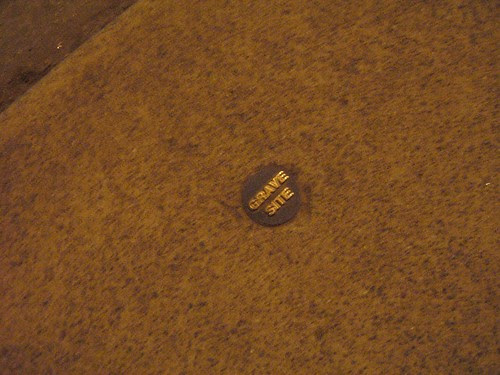 The pinnacle of the evening was the Whaley House. It's steeped in ghostly history and is considered one of the most haunted places in America. The light in the upper window is the Children's Room, where the story goes that even if it is switched off it somehow turns back on again. It has happened so many times that the caretakers no longer bother to turn it off. 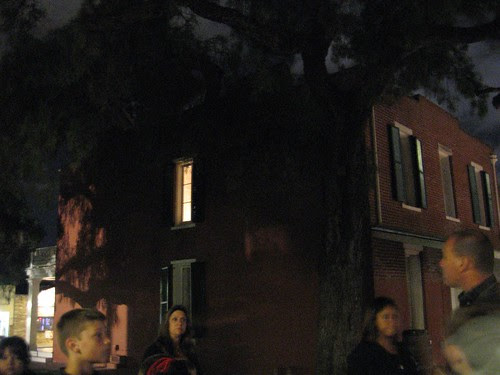 Outside the house is where our guide told us all about vortexes - places where the electromagnetic fields are disturbed in a fluctuating pattern and where some believe ghosts are moving through our world to their own. ooOOOoooo He brought out his EMF device and showed us how it worked. He then let some of the kids in the group take turns finding vortexes - where the readings were strong. There were quite a few in the area, which grew substantially stronger toward a tree. Near the tree, he invited everyone to put their hand in the area and "feel" the vortex. Most people could feel it. I mostly didn't. But I'm a jerk.

After this, he led us to the back of the property where the city's gallows once stood. Nothing going over there, but he claims to have heard footsteps. Then we ended the tour back at the starting point where he showed us his pictures of what he believes are ghosts. They were all dots or blobs of light that looked like bubbles. One was blown up to 100x magnification and people could see the face of a dog in it. Um, yeah. It was sorta cartoon dog-like, but seriously?

All in all, it was great fun and we loved every minute of it. We weren't spooked, but it was still great. Although we were slightly irked at the attention hog teenage girl who was disrupting the guide at every turn - seriously, obnoxious! and who's parents never said a thing. Boo!

The next morning, we slept in (!!) and decided to tour the Victorian Village which was just on the other side of our hotel. It's an area where the local historical society has salvaged the original Victorian mansions and is actively restoring them. They were all closed inside, except for the one that serves as the visitor's center. We ended up watching too much of a documentary about San Diego's history and the fight to save the historic structures. It was kind of great, but too long. 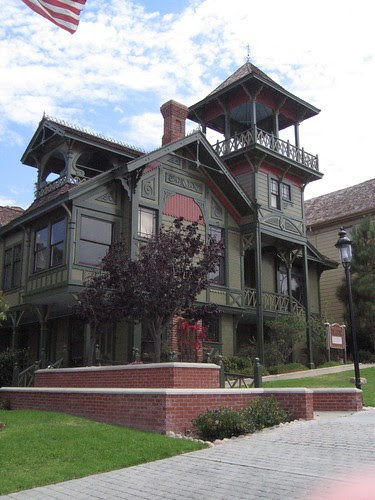 After that, we decided that we should play it smart and head home early. Beat the convention traffic northbound and get home at a decent hour to have some "home time" on Sunday evening.

It was a really fantastic weekend. Lots of rest, lots of activity, lots of sun, lots of fun. Man, we should ditch comic con every year!