My cousin Jennifer is actually my third cousin or something. Her mom and my mom are cousins, so that makes us... I dunno? Somehow related. Our moms were pretty close growing up and when we moved to Anaheim in the early 80's, they lived about 1/2 mile away. In fact, they were close enough that we had the same tract home. Theirs was the 'reverse' of ours, and each had added a den over the years but still mostly the same.
Because we lived so close, we hung out together a lot. We got along well and we would rollerskate nearly every Sunday at the Skateway that was near our house. We were the "gruesome twosome" for most of our childhood. We went to separate schools, though, so we still had plenty to talk about and separate circles of friends, which kept it interesting. The summer before I entered 8th grade (she was going into 7th), I spent every day with her. Her mom had broken her ankle and was off from work for a couple of months, so my mom paid her to keep an eye on me. It was a pretty sweet deal because that was also the summer they got a pool put in their backyard. Endless entertainment! Except that a new pool has new cement and when you're bobbing in the water for hours, your skin gets soft. Without knowing it, you manage to rub the entire bottom of your foot off in the pool and when you get out your feet are a raw, hot pink mess. We had to wear socks the rest of the summer, but it was still awesome.
From then on, we were pretty much joined at the hip. Even when my mom and I moved in with her boyfriend about 30 miles away a few months later. Jenn and I would alternate staying weekends at each other's houses. Each had its own benefits: my parents were more relaxed about what we could/couldn't do (or say); her house was near 'stuff' so we could walk to the movies or hang out with boys. Jenn's mom was on a health kick back then (as she is wont to do) and was cooking nothing but chicken for every meal. When staying at our house once, my mom asked which we wanted for dinner: chicken or steak and Jenn said "if I eat any more chicken, I'm going to shit feathers!" My mom died from laughing so hard and a couple of weeks later mentioned it to Jenn's mom who was mortified and grounded her for a week for swearing (until my mom pleaded her case, saying that she didn't mean to snitch, she thought it was hilarious).
When we got into high school, our lives got busy but we remained pretty close. We'd still alternate weekends together, even when we finally had our own cars and could go anywhere. She even came to school with me one day -- our school had some funky "bring a friend" policy, so she got to come to class with me, which was awesome because she finally got to meet all the people that I talked about all the time.
We stayed pretty much joined at the hip until a few years ago. There was no fuss, no fight, we just kind of drifted. She was part of the dating scene and having fun with that, I was a married old lady who liked to stay at home on Friday nights. We still kept in touch here and there but I haven't seen much of her the past couple of years. During which, she met Bobby and (as happens with every relationship) he became her world. They moved in together and bought a house and she turned into an old lady like me, staying home on Friday nights!
I was really excited when she told me that she'd gotten engaged. Somehow, after all these years, the only person that I could have pictured her marrying was Donnie Wahlberg from his NKOTB days (I was supposed to marry Jonathan Knight, but somehow it didn't work out).
I wanted to make her a little something special for her wedding gift. I wasn't able to make the bridal shower, because we were traveling, so I wanted to give her more than just a Bed Bath & Beyond gift card. Growing up, she had a yellow gingham blanket (called "blankie") that was her security blanket. To this day, blankie has always been on her bed somewhere nearby, just in case of monsters. So for her wedding, I made her a handkerchief of yellow gingham. I embroidered the floral pattern from her wedding invitations in a cornflower blue (also used in the invitations). I thought she'd get a laugh - which she did - but it was really touching to see them share the hankie while exchanging their vows. 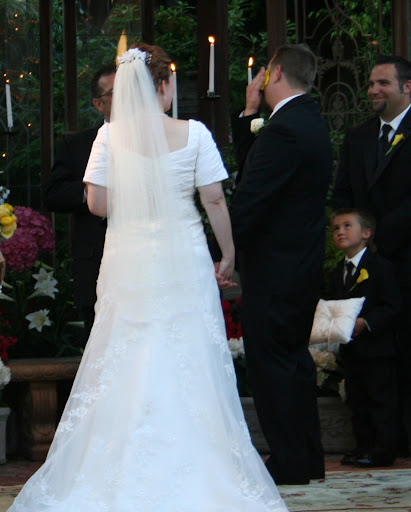 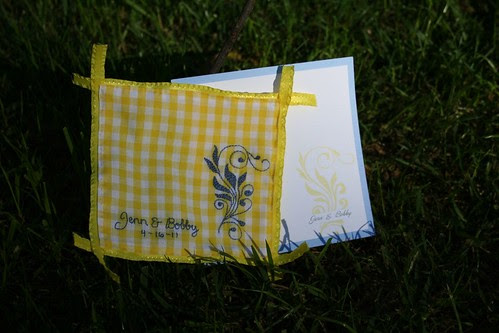 The wedding itself was very sweet and at a charming little place in Santa Ana. The surrounding neighborhood looked pretty typical - strip malls, etc. - and you'd never have guessed there was this tiny oasis hiding just behind. It was a lovely day and I was so happy to have been a part of it.