For the Kidlet's tenth birthday we wanted to do something special. He hasn't traveled much so we toyed with the idea of taking him out of town or even out of state. Usually at this time of year I have a business trip to Florida and so we kind of thought that it would be fun to extend our stay and make a mini vacation out of it. We would all fly in a few days early, hit the Orlando theme parks, and then the boys would fly home while I went to my conference. But it was decided (at a very late date) that I didn't need to travel to Florida after all and by the time I looked at flights and hotels for the three of us... well, things got pricey and it just seemed like a bit too much to swing so early in the year.

But I still wanted to do something special, so I thought "hey, Kidlet has never been to Universal Studios" so we cooked up an idea to take him to the one here, in Hollywood. His parents agreed to let him skip school on a Friday so that we could sneak him away for a fun-fueled weekend at the park. Perfect!

Friday morning, he was dropped off at our house instead of school, which was a surprise. He thought he was going to class but instead ended up with us. Of course, he's smart enough to know that something fun was about to happen but he didn't have any idea of WHAT. And we didn't tell him. Instead, we hauled him in the car and drove north. We told him to prepare to be in the car for a long time (he hates long car trips for some reason) but we were lucky that the Traffic Gods smiled upon us and we made it to Hollywood in about 40 minutes - unheard of! His first blip of excitement was seeing the Hollywood sign out the window of the car. He didn't know that it was a real thing (but was aware of it from TV and movies) and honestly we could have said "that's it!" and turned around and gone home and he would have been pleased. For some reason the sign reminded him about Tom Hanks and he started telling us all about Tom's acting career. Not sure where THAT came from but it was funny...

But we headed to our hotel for the night -- he'd only stayed in one hotel before so this was thrilling for him. We stayed at the Universal Hilton which is pretty fancy and he was impressed. Again, we could have said "here's your present!" and he would have been satisfied. But instead we checked in (all my business travel came in handy! My Hilton Honors membership got us a beautiful room that was ready for us at 10am instead of the usual 3pm) and headed up to the 19th floor. The hotel has lovely views of the valley and we could see the hotel pool by looking straight down the floor-to-ceiling windows. It was like standing on the ledge of a building! So cool!! 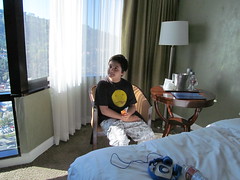 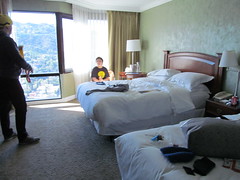 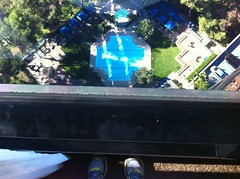 At the bottom of the pic are my feet, pressed up against the glass.


Kidlet was so excited that he immediately claimed the bed next to the window as his. He was chuffed at all the pillows and the big fluffy blankets. He really didn't want to get up, he just wanted to roll around in the down comforter forever. But we said "let's go downstairs" and immediately found the courtesy shuttle to the theme park. He caught on pretty quick and his ear-to-ear grin said it all. 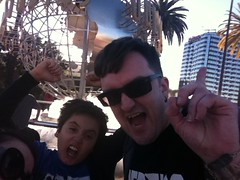 The famous Universal globe and our hotel. Plus my right eye.

We started telling him the history of the Studio and the fact that they filmed actual movies right there, within view. So we headed to the tram tour first. Of course, since he's ten, he can only make goofy faces when a camera is pointed at him. I promise, he is having a good time. While waiting for the tram, we came across a picture of Tom Hanks in line. Hey! There's Tom again! The tram tour is pretty impressive and you get to see some cool stuff, plus there's the King Kong 3D experience that was awesome and JAWS jumped right up at Kidlet in the tram car. Perfect! For some reason, the highlight for him was Norman Bates coming out of the Bates Motel and chasing the tram with a knife. Kids! 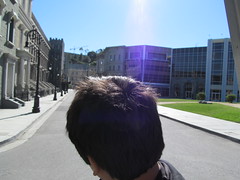 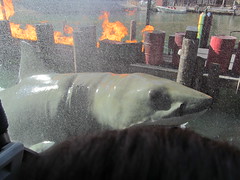 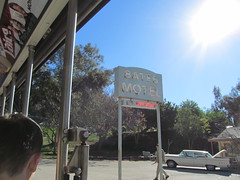 Then we headed to the Lower Area where we passed the Apollo spacecraft and who else but TOM HANKS again? The boys posed for a picture with the astronauts. 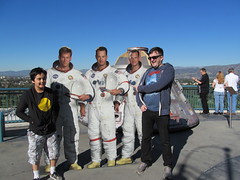 The rest of the rides require that you leave your bags in a locker, so there's not too many pictures. I think we all liked the Transformers ride and the Mummy roller coaster, but they were a bit action-packed for the boys. I think everyone was a little dizzy after those two. Luckily, the Jurassic Park ride is just a mild boat ride (until the giant splash at the end).Kidlet's favorite was the Jurassic Park boat ride, by far. It's got everything. Action, adventure, a life-size T-Rex and you get really, really wet. All told, I think we rode it five times! That's a lotta splashing! It's hard to tell from these photos, but he is SOAKED. His hair is 95% wet and his shirt looks like someone dunked him upside down in the pool. I, however, just got lightly splashed and misted. The Kidlet is super-absorbant! 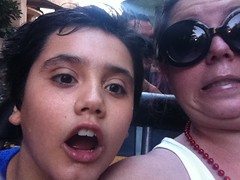 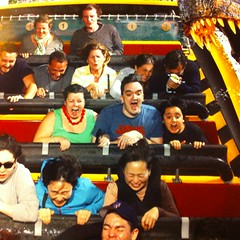 Universal is currently expanding their Springfield area (opening later this year) and so after the Simpsons ride and shopping at the Kwik-E-Mart, we stopped to take our picture with Homer and Marge. This was the highlight for me and I'd spent the days before our trip crocheting beanies and accessories especially for this! I found a men's tank top that had almost the right color of green for Marge's dress and altered it into an A-frame dress. I even spiffied up my red Converse shoes! Then I crocheted a beanie out of bobble stitches to make Marge's hair and a red beaded necklace to match. I also made a Homer beanie with his requisite three hairs and made a matching scarf out of donuts. Mmm... donuts! The back of the scarf had Homer's muzzle which could be worn to create his whole face, as modeled by the Kidlet. The employees in the Springfield area were very excited for us and we got LOTS of compliments. The biggest from Homer himself who tried to eat the donuts at their sequin sprinkles. :) 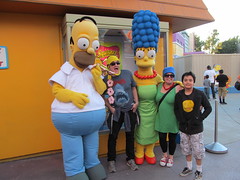 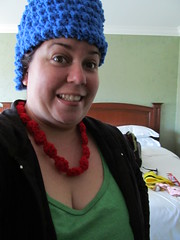 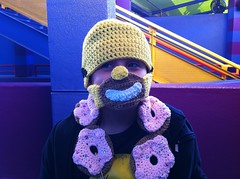 After a long day at the park, we headed back to the hotel. I sent the boys on a scouting mission while I ran up to the room to get the party started! I bought banners and balloons and streamers - even a tiny pinata! But the boys were so exhausted that they came back early, so I only got half the decorations up. Even so, Kidlet was ecstatic and couldn't stop laughing. 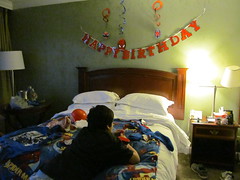 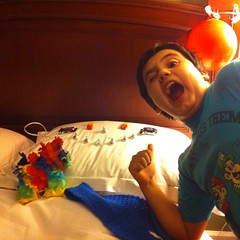 We were all pretty tired but the Kidlet insisted on going swimming. The hotel's pool was heated year-round and open until midnight! There were tons of other kids in the pool, too. All of the out-of-towners thought that 50 degrees at night was downright balmy so they had no qualms about night swimming in Hollywood! Kidlet swam for about an hour and then was so exhausted that it took all of his strength to have some pizza before he fell asleep for the night. Successful day!

The next morning we went back to Universal Studios and went on the rides that we didn't get to on Friday and also saw all of the shows. They each have their own charms, but I think Shrek 4D was the Kidlet's favorite. It was good for the adults, too! No problem convincing us to sit in the air conditioning for 20 minutes! It was another great day that passed really quickly -- with more Jurassic Park boat tours, obviously. Then we headed home and everyone was suddenly drained of all energy. Both of the boys kept saying "no, I'm awake!" the whole drive - even though I saw their chins drooping as we were driving. Good thing I was behind the wheel!

All in all, it was an awesome trip and I think the Kidlet had a good time.